Wills and Kate to take nanny on Australia royal tour

William and Kate will be accompanied by a nanny to help care for the royal baby, Prince George, on their visit to Australia and New Zealand in April. 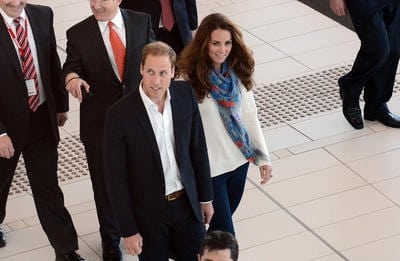 The Duke and Duchess of Cambridge, William and Kate, will take a nanny on their trip to Australia and New Zealand to care for Prince George on his first royal tour.

Kensington Palace has announced that the nanny will accompany the couple to look after their baby son while they carry out official royal duties downunder, a spokesman said.

The Duke of Cambridge’s private secretary, Miguel Head said: “The party is similar in size to recent overseas visits undertaken by Their Royal Highnesses.

“A new addition to the party is, of course, Prince George’s nanny.”

About Wills and Kate bringing their baby on the tour, he said: “Like any new parents they wanted to ensure that the decision was theirs and it wasn’t driven by any other people’s expectations.

“They have come to the decision because it is a long way to go and for a long time – three and a half weeks including the travel – and it’s a decision that they feel comfortable with.”

“Her Majesty has given permission for it to happen,” Mr Head said.

“Indeed Prince William travelled with his parents when he was a very similar age so there is precedent for this.”

Prince George will be eight months old when he joins his parents for his first official overseas tour.

The three week royal tour to Australia and New Zealand will be similar to Charles and Diana’s downunder visit in 1983 when they took the then 9 months old Prince William along for the ride.

It is speculated that the royal baby will attend one official event in each country.

Mr Head said: “One or two engagements across the three weeks have been identified as times when the Duke and Duchess might take Prince George along too. But I’m sure you will appreciate that the couple will have to make a final decision on those moments much closer to the time.

“The Duke and Duchess are content enough to know that he will be with them in the two countries.”

Mr Head said: “There is no hiding the enthusiasm for this visit by both the Duke and The Duchess. The Duke, because he has been before and the Duchess because she has never been to either country but has wanted to do so as long as she can remember.

“The Duke has no doubt that his wife will fall in love with New Zealand and Australia every bit as much as he did, some years ago.”

He added: “It’s a tremendously exciting visit and I can tell you Their Royal Highnesses are looking forward to it immensely.”

The Royal tour by the Duke and Duchess of Cambridge (and Prince George) commences in New Zealand on 7 April 2014, finishing in Australia on 25 April 2014 — Anzac Day.