Royal Family gifts from Australia include dog jackets and lollipops

Clarence House has today released lists of the gifts received by the Royal Family in 2012 when on overseas tours. Whilst in Australia, the Prince of Wales and Duchess of Cornwall received 89 presents, including food, wine, books, pins and baby booties. 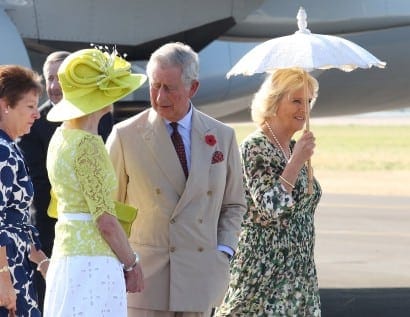 WHEN going on holiday it’s always a good idea to leave a little extra room in your bag for unexpected purchases or gifts to take home. That is, unless you’re travelling Ryanair, and you have to fit your entire luggage allowance into a child’s backpack.

Or, unless you are the Royal Family — in which case you should take along not only another bag, but an extra footman to carry the inevitable loot that will be thrown at you by adoring subjects and foreign dignitaries when touring your colonial landholdings.

Clarence House and St James’s Palace have today released full lists of the gifts received by members of the Royal Family whilst on official Overseas Tours in 2012.

With the Prince of Wales and the Duchess of Cornwall having visited Australia in November, the lists show the full extent of our nation’s particular gift giving generosity.

Amongst the haul, there are a number of presents we expect would be going “straight to the pool room”, including cufflinks, an opal cabochon and a bottle of whisky.

Others, such as a ‘packet of quinoa’ and a ‘decorated pebble’ we imagine were received with a polite “ohhhh, that’s lovely” but then mysteriously disappeared on the flight home, much like the socks your Aunty gave you last Christmas.

Amongst the 89 gifts received by the couple there are a number of traditional items such as books, framed photographs, three ties (we can only assume they have pictures of koalas on them) and DVDs.

Others are slightly more curious. What exactly was the intention behind a ‘length of fabric’? Was the giver trying to inspire a spot of haberdashery by the Prince?

The gift of ‘two waxed dog jackets’ (from the Premier of Victoria) received by the Duchess of Cornwall was presumably designed for use by the canine members of the Royal Family. The fact that the Duchess’s dogs got gifts whilst she got diddlysquat was, we assume, an awkward diplomatic moment requiring another gift of a decorated emu egg or similar to smooth over.

It also appears individual Australians became quite concerned over Charles and Camilla’s state of hunger and thirst on their tour, thrusting upon them items such as a bottle of juice, a bag of organic dried apple rings, two lollipops, chocolate, jam, biscuits and then chocolate again.

Rounding out the list — a ‘metal music box mechanism’, and a pair of baby booties. However, the list makes it specifically clear this last gift was received on behalf of the Duke and Duchess of Cambridge. Given the Prince and Camilla’s visit was prior to the royal baby announcement, perhaps it was the exceptional quality of the gift that inspired the subsequent development?

The Prince of Wales and Duchess of Cornwall were of course not the only members of the Royal Family receiving gifts, nor were Australians the only ones giving them. With the Duke and Duchess of Cambridge touring the Pacific Islands, and Harry popping in to Belize, Bahamas, Jamaica and Brazil, collectively they have a selection large enough to re-gift for many Christmases to come.

We can only imagine the Queen’s face at Christmas this year when she unwraps Harry’s gift and finds a cape, magnifying glass and mounted cow horn.