Watson gets first taste of leadership 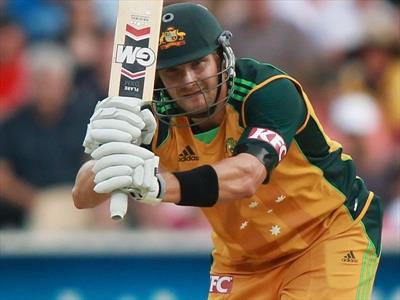 Star all-rounder Watson was handed a surprise first taste of captaincy on Wednesday when he led Australia’s one-day team onto the field in a practice match against Queensland in Brisbane.

Clarke was forced to retire hurt with back stiffness after scoring 13 from 31 balls and watched on as Australia defended 8-263 (46 overs) at Allan Border Field.

Former captain Ricky Ponting was also on the sidelines with a calf problem which restricted him to the nets on the final day of a two-week training camp.

Coach Tim Nielsen stresses both batsmen were rested as a precaution and he has no concerns about either ahead of next month’s tour to Sri Lanka.

“(Clarke) pulled up a little stiff which is why he retired and we’re just going to take the opportunity to get everybody out there,” Nielsen told AAP.

“(Ponting) has had a bit of a sore calf as well which we’re just being careful about.

“Really, it’s a training day for us and, if these guys were like this at training, we wouldn’t expect them to train so we certainly won’t put them through the fielding.”

Watson, appointed vice-captain in March, has been Australia’s best player in all forms of the game over the past two years but has never captained a senior team in his career.

His appointment had raised questions whether he could handle the extra responsibility of leadership on top of being the side’s opening batsman and fourth seamer.

But Nielsen said Watson is a true back-up to Clarke, who must manage his back problem for the rest of his career, and is confident the 30-year-old will cope with the extra pressure and responsibility.

“Very much so,” the coach said. “Selectors don’t just give people the vice-captaincy with the thought you deserve it because you played well.

“It’s an idea that if something does happen to the captain, who is the person we feel can take over the reins and do a good job?

“We can’t forget that we have people with the experience of (Brad) Haddin and Ponting still around the team and, I’m sure if Shane needs to, he will lean on them pretty strongly and also Michael Hussey.

“While he’s the nominated one and probably giving him the opportunity is a longer-term view, he certainly won’t be on his own out there if he captains the side.”

David Hussey was the most impressive performer with the bat, slogging the Bulls’ bowlers all over the small oval, blasting 76 off 41 balls, including seven fours and three sixes.

Animated in the field, Watson appeared to enjoy the challenge and pulled the right rein in bowling himself late to take 3-26 as he and David Hussey (2-13) prevented the Bulls (9-229) challenging Australia’s total.

Clarke was there to clap Watson off the field and pat him on the back.

“Well done skip, one from one,” he said.