Royal baby photos: What name will Will and Kate give their latest little treasure?

Prince William and Kate Middleton welcomed their third child this week - and he's cute as a button. Now everyone's waiting to find out what the new royal baby will be called - and there are a few hot suggestions, including one from Australia's own high commissioner. 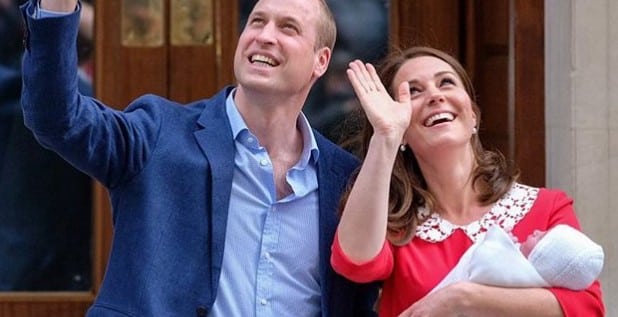 Kensington Palace announced on Monday morning on Twitter, that the Duchess of Cambridge was admitted to St Mary’s Hospital, Paddington in the early stages of labour. By mid-morning it was confirmed that she had given birth to a baby boy.

A few hours later, Prince William left the hospital to fetch Prince George and Princess Charlotte to meet their little brother… and a few hours later, the Royals were already on their way home.

Prince George and Princess Charlotte arrive with The Duke of Cambridge at St Mary’s Hospital to meet their little brother.

And, of course they smiled and waved for the cameras.

In a statement, Kensington Palace said:

“Their Royal Highnesses would like to thank all staff at the hospital for the care and treatment they have received.

“They would also like to thank everyone for their warm wishes.”

The Duke and Duchess of Cambridge and their son have traveled home to Kensington Palace today. Their Royal Highnesses would like to thank all staff at the hospital for the care and treatment they have received.

Welcome to the family. Thank you everyone for your kind wishes.

What will the royal baby’s name be?

We don’t know just yet, the couple said they will reveal this “soon enough”. Of course, royal watcher speculation is in overdrive.

According to reports from the UK, the couple might have dropped a hint when they posed for photographs on the steps of the Lindo Wing on Monday evening.

William and Kate seemingly scanned the crowd for royal photographer Arthur J Edwards – who also took pictures of William’s own birth. They waved at him first and then turned their attention to the rest of the press pack.

Royal fans have gone into overdrive suggesting that this is a sure hint William and Kate will name their baby boy Arthur. That name also happens to be the bookies’ favourite at this point.

As a name, Arthur has strong presence in the royal family. It’s one of Prince Charle’s middle names, one of William’s middle names and was also a middle name of the Queen’s father, King George VI.

Phillip is also being touted as a possible option with Thomas and Albert also outside contenders.

An Aussie suggestion to be taken seriously

The name Alexander has shot up the list after reports that while attending an Anzac Day ceremony in London on Wednesday, Australia’s high commissioner to the UK, Alexander Downer, suggested to the Duke of Cambridge that his would be a good strong name, to which William is said to have replied: “Funny you should say that”.