William, the Duke of Cambridge, has thanked Australians for their gifts and messages of welcome since Prince George was born. 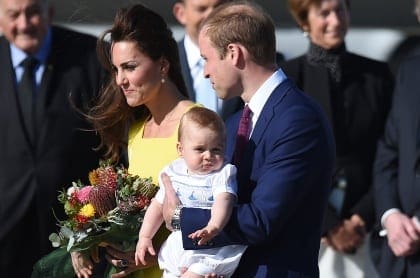 The Duke of Cambridge has joked that young Prince George could go home with more than just a swag of presents from Australia.

“I suspect George’s first word might be ‘bilby’ – only because ‘koala’ is harder to say,” Prince William told a reception at the Sydney Opera House on the first day of the royal visit.

The duke said George, who is on his first trip to Australia, is now busy forging his own link with the country William first visited at the same age.

He thanked Australia for the many kind messages and gifts they had received since George was born.

“We really look forward to our time here together as a family.”

George will spend most of the 10-day visit being cared for by his nanny out of the limelight, but it’s hoped George will make at least one public appearance during the trip, which ends on Anzac Day. – AAP

IMAGE: The Duke and Duchess of Cambridge and their son Prince George arrive for their tour of Australia, in Sydney on Wednesday, April 16, 2013. (AAP Image/Paul Miller)