By George, it’s a Royal tour to Australia and New Zealand

What to look out for on the Royal tour to Australia and New Zealand by William, Kate and baby George.

by Richard Fitzwilliams
in News 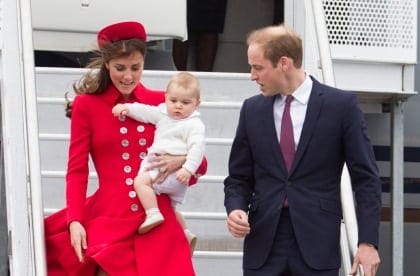 This is the royal couple’s third royal tour abroad since their wedding, Prince George at 8 months will be with them for all bar two nights and is of considerable significance.

In 1983, when William, 9 months old, went with Charles and Diana for their 6 week tour of the Antipodes, the photos of him crawling in the garden of Government House in Wellington were sensational. So was the interest in the tour which was also exhausting and the Prince of Wales felt sidelined by the huge appeal of Diana, this helped create her image and boosted her confidence.

The royal couple are the world’s most high profile and the coverage will be vast. The emphasis is on informality but Kate is already a fashion icon and her wardrobe of over 30 outfits, likely to include her favourites (Packham, Temperley, Erdem etc) will be augmented by those from Antipodean designers. Symbolic jewels such as the Australian wattle brooch and the hibiscus brooch are likely to be worn.

They have an entourage of 12 (In 1983 it was 20) Prince George is likely to appear at Government House, Wellington on 9th April, the same venue as his father’s famous photo opportunity over 30 years before and also at Sydney’s Taronga Zoo.

There is a balance between formal receptions and dinners and outdoor events, where a yacht race in Auckland, a white water ride in Queenstown have been scheduled. There will be a tribute to the victims of the Christchurch earthquake where William visited for the Memorial Service in 2011 and a commemorative service at the ANZAC War Memorial. There will be welcomes by the Aboriginal and Maori indigenous peoples and visit the sacred ground of Uluru (Ayer’s Rock).

In 1999 the Australian people voted to remain a monarchy, and republican support is 39 per cent in the latest poll. It is 42 per cent in New Zealand. Both countries have recently brought back knights and dames in the honours system and are among the 16 Commonwealth countries which have the British monarch as Head of State. I suspect support for the monarchy will be enormously enhanced by this tour. The Queen is obviously much admired. Younger people in particular will emphasize so much more with William and Kate than with Charles and Camilla who are of a different age and there is the added attraction of Prince George which should make this tour a sensational success.