The Scottish Highlands: Rich in adventure, mystery and culture

What would Scotland be without the traditional staples of bagpipes, kilts and breathtaking scenery? Australian Times intrepid traveller Adrian Craddock meets hairy coos, friendly locals and tasty haggis in the Scottish Highlands.

by Adrian Craddock
in Travel 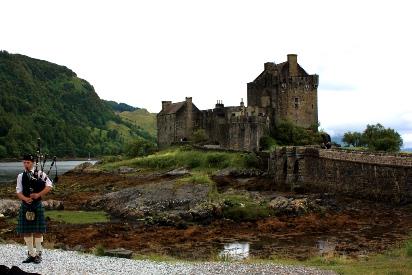 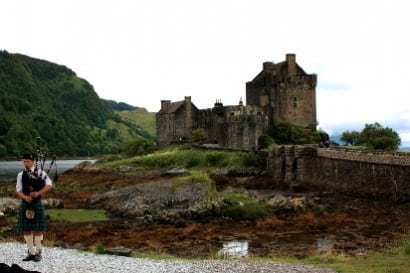 “A QUICK 10 second dip in there and you’ll feel the best you have in months!”

Our guide Ewan is slipping a pair of swimming shorts under his kilt. With a click of a buckle the tartan’s off and he is gingerly negotiating the stony banks of Loch Ness.

In a warmer place it wouldn’t take much to be caught up in the whim. But when you have to remove a jacket, pullover and warm socks, there’s plenty of time to anticipate the water’s temperature.

A flurry of bare skin and splashes turns the cloudy black waters of Loch Ness into tourist soup. But the view of the surrounding hills from water level makes it’s hard not to feel Ewan was right: This is the best I’ve felt in months.

Wildly beautiful, and more than a little mysterious, Loch Ness typifies the Highlands. It’s a setting full of myths and heroes that is never too far from a pub full of people keen to explain it.

Macbackpacker bus tours provide an inexpensive and personable way of penetrating Scotland’s vast north. They offer tours ranging from short daytrips to five-day journeys venturing through the Isle of Skye. 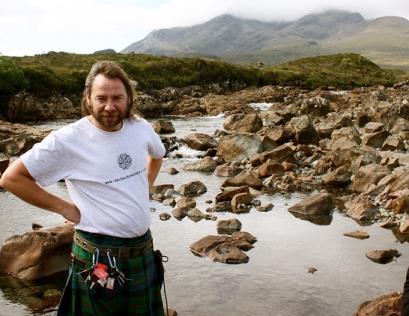 Most importantly, unlike many other bus companies operating out of Edinburgh, their guides are all Scottish. Their stories of bloody battles and Jacobite revolts aren’t read from a script, rather they sound as if learnt from afternoons spent on a fond grandparent’s knee.

With each heather and grazed outcrop come retellings of “Bonnie” Prince Charlie and Scotland’s seemingly endless fight to protect itself against British rule. From the solemn battlefields of Culloden to the site of William Wallace’s decisive victory at Stirling, the cultural presence of Scotland’s century old luminaries is unwavering.

However, be warned: Scottish history is exceptionally brutal. If tales of live skinnings offend, take your iPod.

Thankfully travellers are not confined to experiencing history from a bus-seat. Stops are frequent and never rushed. There’s plenty of time to stroll the restored corridors of Eilean Donnan castle and smell peat burning within croft houses at The Highland Folk Museum.

Of course, Highland history is not all swords and torture. It’s pagan roots have cemented fairies and giants into Scottish folklore. Nowhere is this more present than the swathed Whitehorn trees of Clootie Well. Known for its alleged healing powers, people dunk clothing in the well and then attach it to surrounding branches. It’s believed that as the fabric deteriorates, so too do the illnesses of the items’ owners.

If pagan rituals aren’t your thing, then why not experience the wizardry of a pop culture phenomenon? Scotland plays backdrop to the Harry Potter movie franchise and filming locations attract bookish pilgrims the world over. Aside from visiting bridges and viaducts featured in the films, Macbackpackers also gives travelers a chance to cloak themselves in the misty wake of the Hogwarts Express — AKA the Jacobite Steam Train.

But for all talk of fairies and wizards, it’s the landscape that’s the most magical. One glance at the lush Scottish countryside and it becomes clear why it’s golf’s birthplace. Course designers around the world spend millions trying to recreate it’s natural lay. The white sandy beaches of its western coastline are pristine bunkers. Loch Lomand: a sprawling and perfect water trap. The winding valleys of Glen Coe are imposing fairways, and distilleries like Dalwhinnie make for an unrivaled clubhouse.

Naturally, the best players don’t use a cart. The soaring heights of Quiraing and Storr are best hiked. 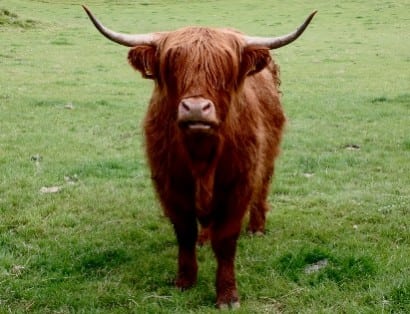 It’s not uncommon to chance upon wild animals while touring through the Scottish wilderness. Native red deer bolt through woodland in plain view of drivers. From the swinging bridge at Rogie Falls you can catch glimpses of wild salmon leaping up waterfalls. The farmland around Glenlomond also guarantees visitors a chance to meet scruffy Highland Cows (pronounced ‘coos’).

Each leg of the trip is punctuated by charming hostels on the coast. The price of accommodation is not included in the tour, but never exceeds more than £20 a night. Like the locals, staff at these places are exceedingly welcoming and full of knowledge.

Thankfully, accommodation is always within throwing distance of affordable restaurants and warm, wood paneled pubs. In Inverness, it’s a quick walk to Hootenanny’s, where local fiddle players underpin the rumble of locals sipping Black Isle porter. Next door to the Skye Hostel in Kyleakin, fisherman show photographs of forearm-sized prawns, before discussing the intricacies of a good whisky. Food-lovers can gorge on shells stuffed with freshly picked crabmeat in Oban and learn Gaelic dances at Skipinnish Ceilidh House as the Firth of Lorn turns gold at sunset.

For all the affordable European air travel now available, it’s our own backyard that often offers the best holidays. All it takes is a four-hour train ride from London to be engulfed by the shortbread-tin romance of northern Scotland, where rugged grandeur and traditional hospitality make for an adventure suited to all.

1. Irn Bru: Originally manufactured as a soft drink for Glasgow’s steel workers, Irn Bru outsells Coca Cola in Scotland. The recipe is so secret that the company’s chairman blends batches of the essential ingredients himself each month.

2. Scotch Broth: A thick soup traditionally made from boiled mutton and diced vegetables. Perfect for when the weather (inevitably) turns.

3. Drambuie:  A whisky-based liquor allegedly invented by the Jacobite leader Bonnie Prince Charlie himself. With hints of honey and herbs, it’s best drank straight or mixed with ginger ale.

4. Haggis: An infamous national dish made by stuffing a sheep’s heart, liver and lung into its stomach and simmering for three hours. Despite its reputation Haggis is surprisingly tasty and is best served with mashed turnip.

5. Deep-fried Mars bar: First thought up near Aberdeen, this dish is popular in chippies nationwide. The secret is chilling the bars before dropping them into the deep fryer to prevent them from melting.