A boat carrying 41 asylum seekers was escorted back to Sri Lanka after it was intercepted by Australian border control, infuriating human rights activists who fear for the refugees’ safety in their home country. 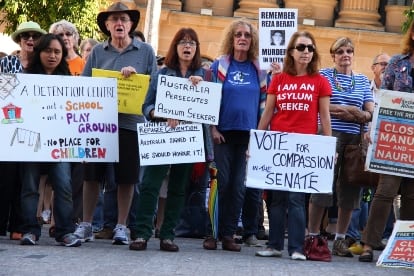 The refugees’ claims were assessed at sea but were rejected and the boat had to return to Sri Lanka under Australian guard.

Human rights activists took to protesting again as they believe a real risk exists that these people would be persecuted once returned to their own government – a situation worsened by Immigration Minister Scott Morrison’s refusal to confirm if just one boat or two, as was suspected, with a total of 200 Sri Lankans, had been handed over to their government.

But by late Monday it was confirmed that a second boat was indeed involved.  An injunction, preventing Australian authorities from returning the human cargo on the second boat to Sri Lanka, was put into effect on Monday night by the High Court while it considered the legality of the Australian government’s intentions.

Australia’s conservative government has taken an increasingly aggressive hard-line against asylum seekers attempting to sail to Australia, promising to “Stop the boats”. Vessels have been returned to Indonesia, where asylum seekers from Afghanistan, Iran, Sri Lanka and other countries pay people smugglers to ferry them to Australia.

“Some of these people will be handed straight back to danger,” said Greens immigration spokeswoman Sarah Hanson-Young about the developing Sri Lanka refugees controversy.

Yet in a radio interview Morrison said: “All were screened in terms of any potential protection obligation and none were found to be owed that protection.”

The initial reports of a handover last week prompted the United Nations refugee agency, UNHCR, to issue a statement expressing “profound concern” that Australia was processing asylum seekers at sea rather than bringing them ashore to assess their claims.

“UNHCR considers that individuals who seek asylum must be properly and individually screened for protection needs,” the agency said in a statement, adding that “international law prescribes that no individual can be returned involuntarily to a country in which he or she has a well-founded fear of persecution.”