Reserve Bank of Australia Governor Stevens has resumed attempts to talk the Aussie dollar down. 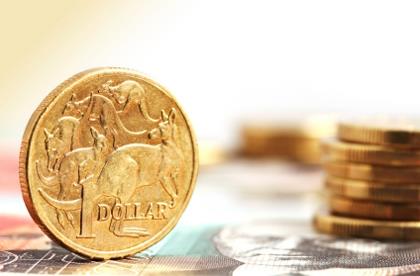 After a stint on the side-lines, Reserve Bank of Australia Governor Stevens has resumed attempts to talk the Aussie dollar down. The jawboning is a timely return given the recent surge higher but is it enough to send it even lower?

It’s the first time this year the RBA Governor has been so explicit about the value of the Aussie dollar since he talked of 85 US cents as “fair value” at the end of last year, with some analysts saying the currency could be as much as 12% overvalued. Of course, currencies rarely trade at “value”, with this very term being quite subjective and of little significance anyway.

What I found most interesting about Stevens’ comments were not necessarily those blatant references to the currency, which the RBA can’t really control anyway, but his views on the economy and interest rates which of course have a real bearing on the direction the currency trades.

He downplayed any negative impact from the budget, mentioned positive early signs of growth in non-mining activity, said monetary policy is already “very accommodative” with real cash rates “well below normal levels” and that low interest rates are working. These are hardly words of a governor that is actually considering reducing interest rates nearer to zero like Europe, the UK or the US.

All in all I don’t think we got as much out of Stevens as the market has made out. He confirmed interest rates will remain on hold for an extended period. We knew this anyway.

For the RBA to get its way and have the Aussie dollar trade back towards 85 cents, it really needs the Greenback to rally. On that front the RBA has bought itself some time.

Stevens needs Yellen to do the heavy lifting – or should I say AUD selling – by providing some timeframe for an adjustment in US interest rates higher post QE tapering. Not likely any time soon.

So this week’s FOMC minutes hold just as much significance as Stevens’ comments did last week. Whilst the Fed is expected to maintain the recent rhetoric on tapering of asset purchases and zero rates for longer, it’s the comments surrounding the dynamic between GDP and employment that will capture the market’s attention.

Was the Fed concerned about the slowdown in real GDP or buoyed by the pickup in the employment market at its last meeting? Mind you, the meeting did take place before the recent better-than-expected non-farm payroll numbers, but the trend has been in place for a long time now. 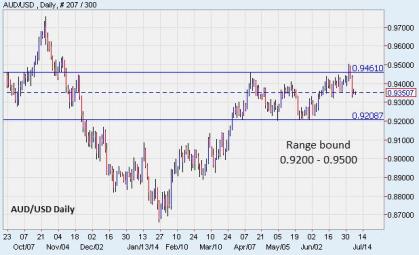 I suspect that the Fed could sit on the more positive side of the ledger for the first time in months. If it does not appear concerned with a slowdown in GDP and sends a somewhat optimistic message on the economy, then this would weigh on the Aussie dollar pushing it down further, possibly towards 92 cents. This would be an overreaction as a slightly more optimistic Fed would not necessarily lead to sooner than expected rate rises, but perhaps signal confirmation it’s happy to end QE as per its plans.

This article first appeared in Business Spectator on 7 July 2014.

For the very latest on Australian dollar movements and to get a great exchange rate, vist the Currency Zone on Australian Times, powered by OzForex.

Jim Vrondas is Chief Currency strategist, Asia-Pacific at OzForex, a global provider of online international payment services and a key provider of Forex news. OzForex Group Limited, is a publicly listed entity with shares traded on the Australian Securities Exchange under the code “OFX”.