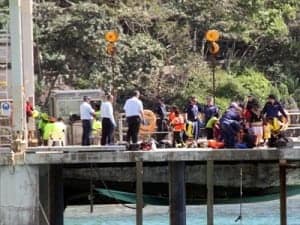 THE legal implications of Prime Minister Kevin Rudd’s recently announced asylum seeker policy have come under scrutiny, with the government announcing that gay refugees would be sent to Papua New Guinea for resettlement despite the country’s strict laws against homosexuality.

Attorney-General Mark Dreyfus told reporters in Sydney overnight that there would be no exemptions that would prevent asylum seekers from being sent to Papua New Guinea if discovered trying to enter Australia illegally. The Rudd government’s plan would exclude asylum seekers from ever living in Australia, with those found to have genuine claims to refugee status being given the opportunity to resettle in Papua New Guinea instead.

Mr Dreyfus said that the Australian government would not insist upon changes to Papua New Guinean legislation that criminalises homosexuality as a prerequisite for the asylum seekers deal to proceed. Individuals that are found to practice homosexuality in Papua New Guinea face strict penalties, including a possible fourteen years imprisonment.

Mr Dreyfus said: “We don’t think that that’s necessary in order for Australia to comply with our international legal obligations and the obligations that we have under the Migration Act. I’m not going to give you a running commentary on laws of countries in our region.”

Mr Dreyfus said: “It’s a general policy that anyone who arrives in Australia by boat without a visa … will be transferred to Papua New Guinea. At the same time our minister for immigration Tony Burke has made it very clear that those transfers won’t occur until there is appropriate accommodation and appropriate circumstances for everyone who is sent.”

Papua New Guinea was founded as a traditionally Christian society, and the country’s leaders told the United Nations in 2011 that they had no intention of altering the legislation in order to be more permissive of homosexual practices. Papua New Guinea’s Prime Minister Peter O’Neill said in 2012 that there were still “strong feelings” against homosexuality in Papua New Guinea and that the population had not yet come to terms with “sexual openness.”

Mr Dreyfus was in Sydney with federal Health Minister Tanya Plibersek to announce an additional $80 000 in funding to the HIV/AIDS Legal Centre over the next four years.