ANZAC DAY | The royal couple have planted a tree that was derived from a pine cone taken from Gallipoli almost 100 years ago. 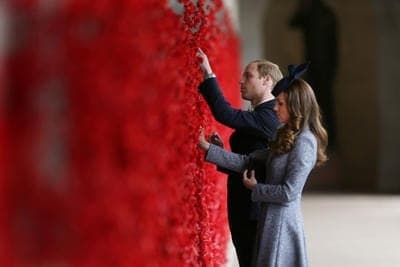 A lone pine descending from a tree at the bloody battlefield of Gallipoli, an Australian family’s loss and now a double royal connection.

Following the national Anzac Day ceremony at the Australian War Memorial in Canberra on Friday (above) , the Duke and Duchess of Cambridge planted an Aleppo Pine sapling derived from seeds gathered after the battle of Lone Pine.

For Prince William, who served in the Royal Air Force for more than seven years, the tree had a special family connection.

Prince Henry the Duke of Gloucester – who later went on to serve as Australia’s Governor General after WWII – planted the original pine at the war memorial in October 1934.

That tree, which is coming to the end of its natural life, was propagated from a pine cone from Gallipoli which Australian Lance Corporal Benjamin Smith sent home to his mother Jane McMullin.

It commemorated his brother Mark who died on August 6, 1915 in the battle of Lone Pine, one of the bloodiest in the campaign with more than 2000 Australian casualties in four days.

Turkish troops had cut down pine trees for their trenches and only a solitary one remained when the battle began.

Mrs McMullin raised two seedlings – the other was planted at Inverell in NSW’s north, where her sons enlisted.

For decades, the Yarralumla Nursery has been collecting and propagating seeds and distributing saplings.

The Duke was given a photograph of Prince Henry planting the tree, framed in wood from the war memorial’s lone pine, and commemorative wooden boxes.

The Duchess wore a grey tweed trench coat, midnight blue fascinator and a poppy broach that Emma, the wife of Australian Victorian Cross recipient Ben Roberts-Smith, gave her at a reception in Canberra on Thursday night.

The Royal couple made a surprise appearance at the dawn service earlier.

They head home with baby George in the afternoon, bringing an end to their Australian tour.

IMAGE: The Duke and Duchess of Cambridge place poppies along the Roll of Honour at the Australian War Memorial in Canberra, Friday, April 25, 2014. Prince William, his wife Catherine, and their son Prince George are on a three-week tour of New Zealand and Australia. (AAP Image/News Corp Pool, Gary Ramage)