The Duke and Duchess of Cambridge have arrived in Uluru where they will spend a night in a luxury tent resort, with stunning views of the rock. 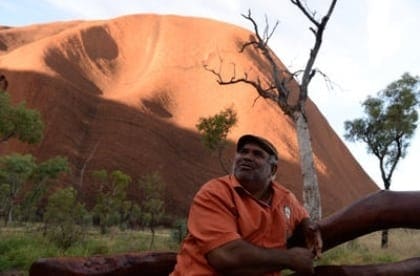 As the Duke and Duchess of Cambridge stepped off their Royal Australian Air Force jet and out into the dry heat of the central Australian desert, they looked straight out at Uluru.

About 150 people in the remote town pressed up against the airport’s fence to get a look at the couple, who touched down just after 1pm local time.

Kate was the first to appear, wearing a taupe cap-sleeved dress by Roksanda Ilincic, with a pale grey belt and nude pumps.

It is her second outfit by the designer since she arrived in Australia.

They were greeted by the Administrator of the Northern Territory, Sally Thomas, her husband Duncan McNeill, NT Chief Minister Adam Giles and his wife Tamara, and traditional owners Daisy Walkabout and Vincent Nipper.

William lingered as he spoke to Ms Walkabout, who greeted his parents Prince Charles and Diana on their trip to Uluru in 1983.

“They’ve travelled a lot and now they will come to see this country, and it will be good to know they have seen Uluru, which is so hugely significant not just for a small group of people but a whole range of people that are related and connected to this place.”

Avril Shear and Lindsay Gordon, Sydneysiders originally from South Africa, extended their outback holiday at Uluru so they could see the duke and duchess as their motorcade left the airport.

“I don’t know if he answered me specifically, but I said ‘welcome to Uluru’ and he said thanks,” Ms Shear said.

“I think it was the best glimpse of them we could have gotten.”

She said the couple were very natural.

“I think the difference with them is that you know they’re so in love; it brings people a new hope, less of a stiff upper lip,” she said.

William and Kate headed to the National Indigenous Training Academy to present students with graduation certificates.

IMAGE: Traditional owner Sammy Wilson, who will guide the Duke and Duchess of Cambridge, Prince William and Catherine on their walk to the base of Uluru in the Northern Territory, Monday, April 22, 2014. Their Royal Highnesses are visiting Central Australia as part of their Australian Tour. (AAP Image/Dean Lewins)