Opposition immigration spokesman Scott Morrison has said that elite SAS troops should be sent on-board boats carrying asylum seekers that threaten self-harm in an attempt to be allowed into Australia. 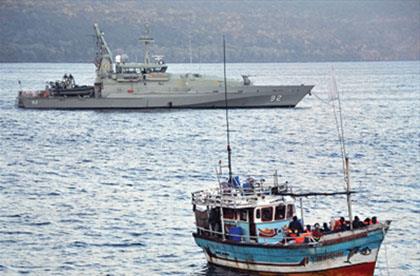 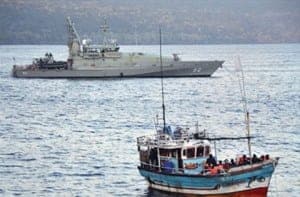 OPPOSITION immigration spokesman Scott Morrison has said that elite SAS troops should be sent on-board boats carrying asylum seekers that threaten self-harm in an attempt to be allowed into Australia.

Mr Morrison said: “The vessel has basically been taken over there with threats, a duress situation potentially.”

Home Affairs Minister Jason Clare confirmed that oil and chemical tanker Sichem Hawk had provided aid to a boat carrying 34 asylum seekers and two crew members after finding it in distress off the coast of western Java. The Australian government had been coordinating with the Sichem Hawk to return their rescued passengers to Indonesia when the tanker’s captain changed course for Christmas Island in fears that the asylum seekers would begin to self-harm.

Mr Morrison referenced the controversial boarding of the MV Tampa by Australian troops in 2001 as an example of how Australian special forces could be utilised to combat the issue of illegal immigration. The MV Tampa boarding took place shortly prior to the 2001 federal election and highlighted the Howard government’s hard-line policy towards asylum seekers.

Mr Morrison said: “Well that’s what John Howard did, and that’s the message that was sent to the region and we all known the result of that. People who are going to try this on should be stopped. That’s exactly what happened with the Tampa. John Howard took a strong stand on that.”

Opposition leader Tony Abbott stopped short of calling for armed intervention in situations involving potential refugees, however claimed that an Abbott government would not be “blackmailed” by asylum seekers that threaten self-harm.

Mr Abbott said: “The Australian government should not be expected to take responsibility for foolish actions by non-citizens. What we will ensure is that we are not played for mugs by the people smugglers and their customers . . . we will not be taken for a ride as a nation and a people. People should not threaten acts of self-harm, and the Australian government will not be blackmailed.”

Federal Immigration Minister Tony Burke said that the Opposition’s claim that they would tow boats carrying asylum seekers back into Indonesian waters was being misrepresented to the general public. He said that Australian forces would only be able to take the boats to the edge of Indonesian territory, with any further action constituting a military incursion on sovereign territory.

Mr Burke said: “To take a Naval vessel into someone else’s territorial water, you need their permission, and even Scott Morrison has been acknowledging on the weekend that when they say they’ll tow the boats to Indonesia, they’ll actually only go to the edge of Indonesian territory. They say they won’t go into Indonesian territory because you can’t take a military vessel into someone else’s country.”

Prime Minister Kevin Rudd visited Indonesia on Friday, signing a joint communique with Indonesian President Susilo Bambang Yudhoyono pledging that both countries would avoid “unilateral actions” that would cause difficulties in their relationship. This was seen as a veiled condemnation of Mr Abbott’s plan to return asylum seeker boats to Indonesia, which has been publically derided by Indonesian officials.