London Aussies urged to cast their votes at Australia House

AUSTRALIAN ELECTION 13 | With the 7 September election looming, Australian expats in the UK are being urged to cast their vote at prepolling facilities at Australia House. 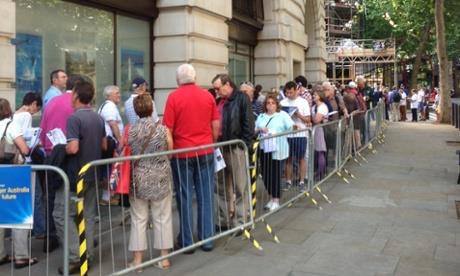 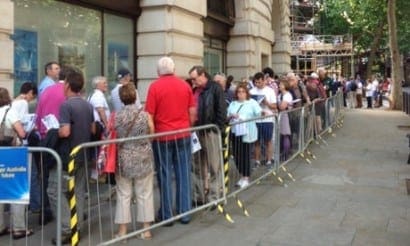 WITH the 7 September election looming, Australians in the UK are turning out in force to cast their vote at prepolling facilities at Australia House.

The Australian High Commission opened its doors to voters on Monday 26 August, a public holiday in Britain. Hundreds of Australians queued to cast their vote, and the facility has experienced a consistent flow of expats and overseas visitors since.

Read: Ticking all the boxes – the Australia House voting experience

Consul General at the High Commission, Ken Pascoe, said over 5,326 voters passed through the doors at Australia House in the first week.

“There is a large Australian community living in the United Kingdom and many more holiday makers.

“That is why the Australian Electoral Commission and the High Commission have made arrangements to ensure that every eligible Australian voter has the opportunity to vote at Australia House.”

However, campaign leaders in the UK for Labor and the Greens have suggested voter turnout is down from previous years and are urging Australians to make their vote count in the remaining days of pre-polling.

“While the number of voters has been down on past elections we are hoping for a big turnout this week,” UK campaign manager for the Australian Greens, Mat Hines, told Australian Times.

“A lot of people are telling us they are voting Green in the Senate to prevent the potential of an Abbott government from having complete control.”

Labor, the Coalition and the Greens have said they believe the expat vote in the UK could be crucial in some inner-city seats and have repeatedly urged overseas Australians to make their vote count.

In the 2010 federal election over 16,000 Australian voters cast their votes at Australia House, making it the largest polling station in the election.

Jason Groves, president of Australian Liberals Abroad, told Australian Times it was likely the Liberal Party would win the UK vote for the first time.

“Australia House is a polling booth long regarded as one that Labor wins, although this time I think the Liberals are going to win it for the first time.

“There is a very clear message being sent this election that it is time for change.

“Speaking to people from marginal seats, there is a real sense that Australia has had a unique set of economic tailwinds over the past few years that Labor have squandered through mismanagement and huge disincentives for businesses and individuals to invest in Australia.

“A lot of Australians are looking for the right time to return to Australia, and they are voting for a new government that will bring more favourable economic circumstances that will allow them to move back and continue their careers with confidence.”

The poll suggests Labor will lose this weekend’s election, with the two-party preferred vote showing Labor on 46 per cent compared to the coalition’s 54 per cent.

ALP Abroad president Paul Smith said it was important for voters overseas to consider the kind of Australia they would one day like to return to.

“Australians in the UK know a conservative government will cut jobs, drive the economy into recession and make the country more unfair,” he told Australian Times.

“I urge Australians to come out and vote Labor for a country they can be proud of when they are overseas and that offers a strong economy with fairness when they return.”

ALP Abroad are hosting an election party from 9am at the Coach Makers Arms in Marylebone. Results will be shown live on a projector in a private room at the venue, with lamingtons for guests.

Australia House will remain open for prepolling until 9pm on Friday 6 September. It will also be open for late-night voting on Thursday 5 September until 9pm.

Prepoll voting is not available on Saturday 7 September due to the time difference between London and the closing of polls at 6pm Australian Western Standard Time (AWST).

Read: How do I vote in the UK?