The royals keep mum about Kate’s bare bum. A photo from the royal couple's Australian tour, published in the popular German newspaper Bild and Australia's Daily Telegraph, has caused a huge stir among the British press. The decision to publish the offending photo has been described as ‘sleazy and creepy’. 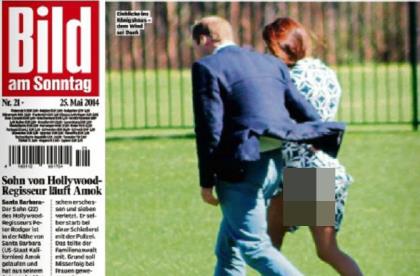 In 1980 the Duchess of Cambridge’s mother-in-law was photographed wearing a see- through skirt back lit by the sun.

Snapped holding children, of the nursery school where she worked, Lady Diana Spencer was blissfully unaware that while she was innocently posing for the paparazzi she was unfortunately posed with the sun from behind shining through her dress. History repeated itself during the royal’s recent visit to Australia when a gust of wind raised Britain’s Duchess Catherine’s dress exposing a bare bum. For the first time since her wedding to Prince William Kate’s bum is getting more attention than her sister Pippa Middleton’s did after the ceremony.

While the UK has put a complete block on publishing the incriminating photo of the beloved Duchess, Germany’s largest newspaper Bild was less ‘respectful’ publishing the photograph earlier this week adding the comment (or is it compliment) that the future queen had “a beautiful bum”.

The photo was taken as the royals stepped out of a helicopter in the Blue Mountains west of Sydney.

The British press was less than impressed with Bild’s decision to publish the photo.  The Daily Mail went as far as calling the decision “a breach of privacy” and slamming the comment about the Duchess’ beautiful bum.

On Wednesday Britain’s Daily Mail felt publishing the pic — pixelated over the offending parts — as more appropriate and offered fashion advice to the future queen on how best to avoid similar future situations.

Comments from Kensington Palace on the situation is, well none.  The royal couple has been plagued with the invasion of their privacy form the on-set of their romance

In 2012 a French magazine printed a picture of Catherine sunbathing topless while on holiday with William and the couple blasted the invasion of privacy as “grotesque and totally unjustifiable”.