Australia’s royal baby gift is revealed, and it’s not pineapple

As tributes pour in to congratulate the Duke and Duchess of Cambridge on the arrival of their first child, Prime Minister Kevin Rudd has revealed what Australia will be sending the royal baby that has it all - a bilby. 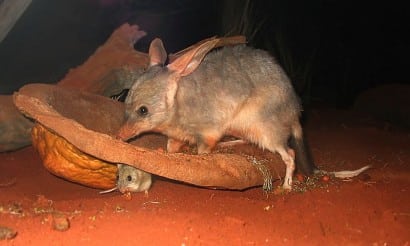 THE PEOPLE of Australia will be sending the royal baby a plush bilby toy and naming a bilby enclosure after him, the Prime Minister announced.

The Duchess of Cambridge gave birth to a baby boy on Monday afternoon at 4.24pm, weighing 8 pounds and 6 ounches.

Kevin Rudd has revealed plans to donate $10,000 to Taronga Zoo’s bilby preservation programme which is helping restore numbers of the shy mammal in the wild.

A bilby enclosure will also be named after the new prince whose name is yet to be revealed.

Australia has a long tradition of sending the Royal family quirky gifts and have made headlines around the world for a series of unusual choices.

In 1947 when the future Queen, Princess Elizabeth, married Philip of Greece and Denmark, Queensland sent 500 cases of tinned pineapples to starved post-war Britain.

The state also sent a maple cigarette box with an inscription from the people of Queensland inside the lid.

The Australian Junior Red Cross sent over 900 kilograms of sweets to be distributed to the children of London.

When the Duke and Duchess of Cambridge were married in 2011, Australia made a $25,000 donation to the Royal Flying Doctor Service. The couple had requested well-wishes to donate to one of 26 charities rather than receive gifts.

The royal baby will also receive a copy of the Australian children’s book “Ten Little Fingers and Ten Toes” by Mem Fox and a free pass to Taronga Zoo.

The fate of Julia Gillard’s knitted kangaroo is as yet unknown. The former PM appeared in the Australian Women’s Weekly knitting the gift shortly before she was overthrown by Kevin Rudd for the leadership.