Australian Immigration and Border Protection offered a group of 157 Sri Lankan asylum-seekers a lifeboat to India. 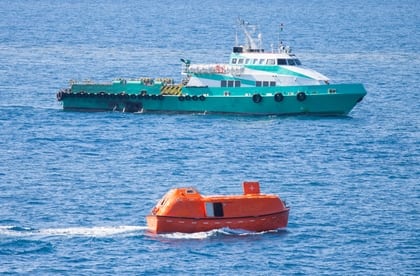 A group of 107 Sri Lankan adults and 50 children were detained on a customs boat before being told they could have a lifeboat to find their way back to India.

Executive director of the Human Rights Law Centre, Hugh de Kretser told the ABC: “The clients we spoke to were absolutely terrified at what lay ahead for them.”

“They were terrified of the prospect of being dumped in the ocean on lifeboats, without experience in navigating or operating a boat and having to take responsibility for the families that were on the boat.”

The group of 157 Tamils, including 50 children, were spotted and taken into custody by Australian officials in June after leaving a refugee camp in India after having fled persecution in Sri Lanka.

The group had allegedly been locked in windowless rooms aboard a customs boat for almost a month before being taken to Australia on about 25 July.

Immigration Minister Scott Morrison said that, under an agreement with New Delhi, the group could be sent back to India even though they are not Indian citizens. But the group chose to refuse the arrangement and have now instead been transferred to the Nauru detention camps.

When the ABC asked Morrison if the group were really offered orange lifeboats to get them to India, his response was that he does not discuss those ‘sort of operational matters’.

But Krester said that customs officials had selected 15 of the 107 adults and trained them how to use the lifeboats. He said the officials spoke to them in English saying each boat would haul 60 people and that they would have to navigate their own way to India.

“When they refused, saying they had no experience in operating or navigating a boat, and couldn’t take responsibility for ensuring the safety of those on board, the officers told them that it was an Australian government decision and they had to obey,” he said.

Australia’s policy on asylum-seekers means that those arriving by boat are sent to Papua New Guinea or Nauru while also being denied full resettlement in Australia regardless of being able to prove that their lives were in danger in their home country.

PHOTO: Shutterstock.com file image of a lifeboat similar to those being employed as part of Australia’s asylum seeker boats policy.