Australia to see rush of UK tourists after royal visit

The royal tour of Australia by William, Kate and baby George has already sparked a boost in down under tourism bookings from the UK. 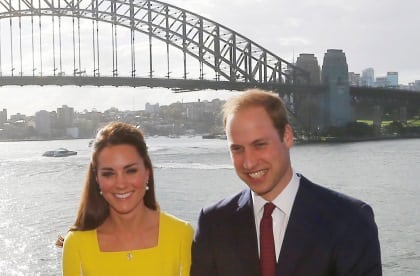 Kate, Wills and baby George are creating quite a storm on their trip Down Under, reinvigorating British interest in Australia and New Zealand.

Travel companies have already identified a rise in bookings to both destinations, no doubt inspired by images of spectacular landscapes and bustling cities flashed across television screens.

“We’ve seen a huge spike in interest in flights to New Zealand, with searches more than doubling in the 24 hours since the tour began,” says Ben Rosier, spokesperson for Cheapflights.co.uk.

“Spectacular natural scenery, the outdoors lifestyle, and, in recent years, the Lord of the Rings connection have been massive drivers for Kiwi tourism; helping to attract adventurers and mainstream tourists alike.

“But a royal tour, particularly with a young family – not to mention the newest heir to the throne – is truly ‘precious’; a real opportunity for a country looking to showcase its extraordinary natural beauty to the wider world.”

Overnight, the website recorded a 112 per cent increase in flight searches to New Zealand and they expect this to continue.

“Never mind Lord of the Rings,” says Rosier. “This time it’s all about Lord of the Kings!”

Any Brit wanting to follow in the footstep of the Cambridges might need to have a healthy bank balance at their disposal. TravelSupermarket estimates that the royal tour will be 40 times more expensive than the average British holiday Down Under.

That said, TravelSupermarket has still seen a 45 per cent increase in searches for family holidays to Australia.

Sydney has received the biggest uplift (57 per cent), followed by Adelaide (50 per cent) and Tasmania (47 per cent). And for Brits who don’t have a royal budget to play with, Bob Atkinson, travel expert at TravelSupermarket, suggests planning six months ahead to get the best deals.

If money is no object, royal fans might want to consider VeryFirstTo.com and Bridge & Wicker’s tailor made Royal Australian Tour, aimed at couples and their little prince or princess. Highlights of the month-long trip include exploring the Great Barrier Reef islands by private yacht, sightseeing by helicopter and even a behind-the-scenes tour of Sydney’s Taronga Zoo, where a bilby enclosure is being named after baby George.

Perhaps most Britons will stick to travelling like commoners.

IMAGE: The Duke and Duchess of Cambridge pose in front of the Sydney Harbour Bridge at a reception at the Sydney Opera House, April 16, 2014. (AAP IMAGE/ REUTERS POOL, Jason Reed)