As Nauru confirms that Angelina Jolie, actress and UN delegate, has received an invitation to visit asylum seekers on the island, Australia's immigration minister Scott Morrison denies concerns over her proposed trip. 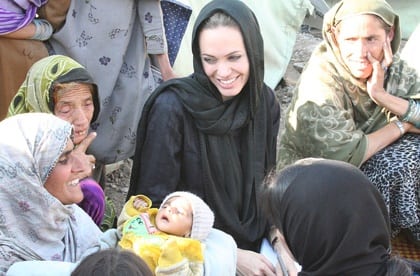 Special envoy of the United Nations for refugee issues, actress Angelina Jolie, has been invited to Nauru to draw attention to Australia’s detention camps.

Conflicting media reports makes it unclear if the humanitarian will in fact be visiting these asylum detention centres.

In media reports earlier this week it was thought that Angelina Jolie had confirmed the acceptance of an invitation to the island of Nauru, but by Monday night it remained unclear if Jolie will indeed be visiting the tiny island.

Jolie has been invited to visit these Australian funded offshore detention centres to establish the plight of those being held there.

Unconfirmed claims are that the conditions at these asylum camps are far from the “world’s best practice” as has been claimed by Australia’s immigration minister Scott Morrison.

According to reports by The Guardian 208 children, amongst the group of asylum seekers that have been transferred to the island, have been physically, verbally and sexually abused by staff managing the detention centre.

Making the situation significantly worse is the fact that the Nuruan government has increased the price of a media visa by 4000%, now costing a journalist $8,000 to apply for a Nauruan visa.

Mr Morrison denied any concern over Ms Jolie’s visit saying, “I don’t propose to respond to any of the assertions you’ve just made.”

“As I’ve said, who visits Nauru is a matter for the Nauruan government so I’ll leave that to my colleagues on Nauru.”

A statement by the Nauruan government said it believes Angelina Jolie’s visit will be a wonderful opportunity to showcase the facilities for refugees on Nauru, which it believes are in line with the world’s best practice specifications.

The Nauruan government says the date and details for Jolie’s visit are yet to be confirmed.