Antipodeans flocked to Edinburgh for one of Europe's most celebrated end-of-year outdoors parties, Hogmanay, with many then joining the brave and brazen in the near-freezing temperatures for the 'Loony Dook' New Year's Day swim.

Hundreds of Aussies and Kiwis were among the 75,000 New Years’ revellers at Edinburgh’s Hogmanay festival, which saw in 2017 in record numbers.

As Antipodeans flocked to Scotland’s capital for one of Europe’s most celebrated end-of-year outdoors parties, many from across Australia joined the brave and brazen in the near-freezing temperatures of the nearby Forth River the next morning for the traditional ‘Loony Dook’ New Year’s Day swim.

Dressed in catchy costumes and ‘down under’ attire, wading into the chilly waters of the scenic Edinburgh bay, daring backpackers donned Aussie flags and akubra hats (with inevitable corks) to accompany more localised swimmers in costumes as varied as the Loch Ness Monster and a one-man yellow submarine, complete with kilt.

Speaking to Australian Times at the event, twenty-something backpacker sisters Elizabeth and Holly Lehman from outside Melbourne spoke of their excitement and relief at surviving the now customary dip into freezing Scottish waters. 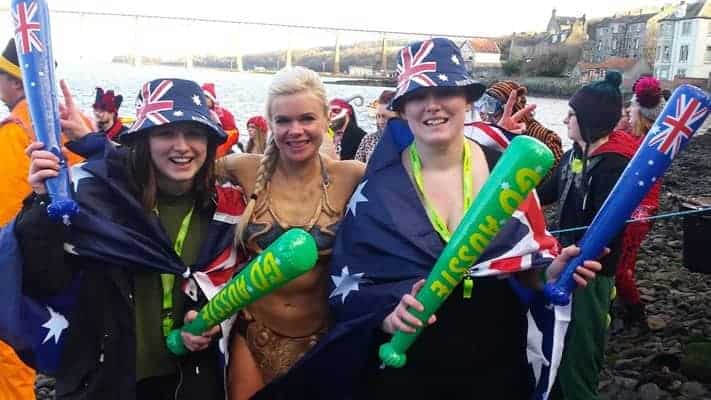 “Our mum bought us these tickets as a present, and she has been watching us here in Edinburgh through ‘face time’ on our phones back to country Victoria” they boasted.  After emerging from the menacing waters, shivering but in high spirits they added: “we just went in up our knees – the water was bloody awful, but well worth it!”

Earlier some 10,000 party-goers on Princes Street were treated to a bonanza fireworks extravaganza on New Year’s Eve over Edinburgh Castle, preceded by a Candlelit Torchlight Procession through the capital’s streets.  The highlight of the 2017 event was the star-studded Concert in the Gardens beneath the picturesque historic castle.

Scottish hit artist Paolo Nutini was backed by 1980s acts The Lightning Seeds and The Charlatans, tickets all selling out in a record three hours.

Among those attending the events was Simone Lydiate from Queensland’s Gold Coast.  She told Australian Times:  “Edinburgh is much more civilised than other European venues for New Year’s, especially Amsterdam.  It was pretty crazy there, people letting off fireworks everywhere.  The fireworks are far better here in Scotland!  Edinburgh is well worth the 15 hours there and back on a bus from London!” Many more Australians also marked the festivities and arrival of 2017 back home by celebrating and syncing with Sydney, Melbourne, Queensland and Perth’s New Year’s chimes from 1pm onwards in bars across Edinburgh.

Organisers of this year’s Scottish festivities estimate the Hogmanay New Year’s Festival brought in some extra 150,000 visitors to the region from 80 countries, and is worth around £40 million to the local economy.