A survey conducted by Hydrogen Recruitment shows that business executives place Sydney just after London and New York as best places to work. 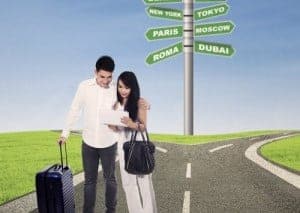 Reported by a respected recruitment agency Sydney, Australia is one of the top three cities in the world amongst executives across a range of industries would like to relocate to.

London came out tops while New York was also considered a favourite.  But it seems this survey found that younger professionals would rather swap the dreary UK weather for the idyllic lifestyle Australia offers.

The survey, conducted with 2444 individuals from 100 countries, also found that the current global economic climate has contributed to the fact that more than 33% of professionals are more likely to relocate to a new country compared to just 16% in 2010.

Interestingly the report also found that careers abroad are now also a possibility for those in more junior positions with only 17% holding an educational qualification above a degree. In 2010, 30% of employers were in possession of qualifications above a degree.

Apparently the sunny skies and sandy beaches associated with the Australians lifestyle serves as a major drawing card for younger professionals as a preferred relocation destination. And it is the thriving technology industry that has attracted the most interest followed by the fields of the energy and life sciences.

Hydrogen Group COO Simon Walker said: “The findings of this report show that we now have a worldwide talent pool.

“Despite the fact that geographic and cultural boundaries as an impediment to hiring have dropped away during the recession, there is still a clear leaning towards English-speaking and safe countries like Australia and cosmopolitan cities like Sydney by candidates.”

Year after year, big urban centres present a separate class when it comes to professionals’ preferences. It seems that international setting and networking opportunities, coupled with high quality of life and safety often lead to neglecting higher taxes when considering re-allocation. Taxes are the main draw used by exotic tax havens and second tier expat destinations. This might be why London, Singapore, Sydney and other global cities always rank better than smaller destinations such as Malta, Gibraltar and Cyprus. However, in some industries, smaller destinations beat bigger ones. In Europe, Malta is the gambling business hub thanks to its generous tax rules. As founders of Casinopilot24.com a casino affiliate business based on the island note, low tax rates and a dynamic industry with young talent is perfect if you want to have a digital business without notorious German or French taxes and bureaucracy. It’s similar to Cyprus where many FOREX trading companies have set up shop in recent years. Still, when it comes to overall rankings, countries such as Australia lead the pack.