INTERVIEW | You Am I guitarist Davey Lane on his solo EP

Davey Lane lived every bedroom guitarist’s dream when he became the fourth member of his favourite band You Am I. GEORGE KATRALIS speaks with the renowned Australian guitarist about his debut solo EP The Good Borne of Bad Tymes. 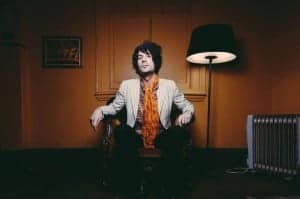 AS spots and patchy facial hair took over my face, it didn’t take long to embrace the ‘musical education’ my Dad gave me growing up.

Rock ‘n’ Roll became my way of life. I was in my little bubble of 60’s bliss, pretending I was as Carnabetian as Ray Davies, and as opinionated as Bob Dylan. That was until the 11 May 2001. The night I first saw, You Am I!

As the lights went down at the Enmore Theatre, four skinny guys emerged. Standing in sharp suits, guitars ringing with feedback. From the first riff, I was hooked!

I could feel my young mind being moulded. Spitting and swearing like it was socially acceptable, wind-milling on the guitars like they were in The Who. And all this even before I took notice of the music I was hearing.

It went beyond music though. It presented an option. All I wanted to do was play in a band.

Glowing with excitement about my recently decided career path and decision to grow my sideburns. My friend began to tell me all about my new favourite band. Paying special mention to their newest member, a guy by the name of Davey Lane.

Davey Lane has lived the ultimate bedroom guitarists dream. Getting the opportunity to join his favourite band.

During his inception into You Am I, Lane was fresh out of high school. Being 12 years his bands mates junior and only in primary school when they released their debut album ‘Sound as Ever’ in 1993.

You Am I held their three-piece line-up for 10 years. That was until Lane came to the bands attention in 1999 through writing guitar tablature for a You Am I fan page created by his friend Danny Yau.

It was through this association that the aspiring musician got his chance to meet his idols and take his place in the band.

Impressed with how Lane was a fellow human, cut in the You Am I mould. Front man Tim Rogers spared no time in getting to know his young counterpart. Early exchanges between the pair turned into friendship and culminated one evening when the 18 year old Lane was invited on stage to play a couple of songs with his favourite band.

This set the wheels in motion for Lane’s life as he took what would become his spot on stage next to the men he once called heroes and now calls friends.

“You Am I were one of my favourite contemporary bands growing up, but I think it was more a feeling of absolute respect for them as a band and for their music.

“I knew all too well that it was a big deal, and wanting to not only be up to scratch but to contribute something worthwhile to it was at the forefront of my mind,” Lane told Australian Times.

Lane is now regarded as one of Australia’s best guitarists and hardest working musicians. Lending his talents to the likes of Jimmy Barnes and Crowded House as well as featuring in Aussie Super Group The Wrights where he was joined by names such as Phil Jamieson, Chris Cheney, Nick Cester and Bernard Fanning to recreate Stevie Wrights Evie Trilogy.

However, it’s in the creation of his own music where Lane has been the silent achiever.

“I’ve always considered myself more a songwriter than a guitarist, it’s just that I guess the latter advanced to a serviceable level before the former.”

Lane’s first foray into songwriting came in the form of his band ‘The Pictures’.

Joined by bassist Luke Thomas and drummer Brett Wolfenden (and later Johnny T). The Who-esq three piece went on to make four EPs, two albums and a B-Sides compilation. It was through this avenue Lane got the chance to step out on his own, away from the You Am I spotlight and hone his craft as a songwriter and a front man of his own band.

“Everyone begins out copying their heroes, and it makes me cringe to hear how overt the influences are on my earlier songs.

“Its only been in the last few years that I feel I’ve been able to find my own voice in terms of songwriting.”

One thing is certain, Lane has taken the time to not only learn but also master his craft. The care shown on his songs is evident, he’s constantly striving to better himself and it comes through on his records.

“I’m writing less duds than I used to, though I’m still well aware of my limitations as a lyricist and vocalist.”

This year has seen Lane take yet another step in his evolution, with the release of his first solo work. The Good Borne of Bad Tymes is Lane’s first release under his own name.

“I liked the idea of having complete stylistic freedom with no preconceived expectations of the material that’s released under my own name.”

The Good Borne of Bad Tymes is a step in a completely new direction for Lane. Although remnants of his past musical direction are evident in tracks like ‘Sinking May’, It’s in the EP’s single ‘You’re the cops, I’m the crime’ and the middle crescendo of ‘Comfortably dumb’ where we hear Lane’s guitar sound traded in for a more synthesized progressive rock, direction.

“It’s a style that’s always appealed to me — it’s just the way I started writing a couple of years ago. I’ve still got jangly guitar pop and rock ‘n roll in my blood and it always will be — it’s just another avenue I wanted to explore.

Although having upwards of 20 odd songs recorded, Lane has avoided the temptation of releasing a full-length album. Instead, releasing a 5 track EP with a follow up planned in the coming months.

The Good Borne of Bad Tymes is as good an effort as one would expect from the You Am I gunslinger. The songs are honest; the production is raw and really pushes the boundaries beyond what he considers his limitations to be.

In truth, as much as it seems musically a step away from what we’re all used to, it’s in reality, with its energy and honesty, closer to him then we’ve ever had the pleasure of being before.

“If it wasn’t for You Am I, my life would have taken a whole other trajectory, which is not something on which I’d ever like to ponder. I didn’t have much aside from music going for me so I don’t really want to speculate what might have been.”