Ian Moss on Cold Chisel: Regrets, he has a few

With Cold Chisel set to play their first northern hemisphere dates in almost 30 years, Ian Moss chatted to TIM MARTIN about what it’s like being back on the road, how Cold Chisel could have been as big as AC/DC and how you don’t always need to be the best of friends to become a legendary Aussie rock band. 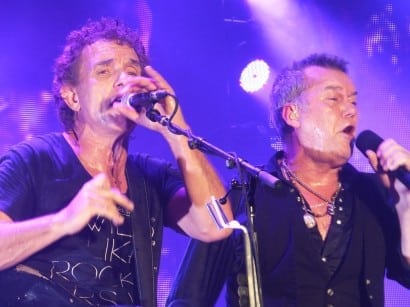 By Tim Martin
IT’S a grey and early London morning when I pick up the phone to chat to one of Australia’s most revered rock legends. For the man on the other end however, it’s neither grey nor early but is a balmy (yet wintery) Sydney evening. And as much as I would like it, Mr Ian Moss is not in a telephone booth (nor is he with Tucker’s daughter) but is negotiating the notorious traffic of Australia’s most picturesque capital city.

“It’s hard to believe we’re about to be playing in one of the biggest and oldest cities in the world,” the Cold Chisel veteran laughs down the line. “And at one of the most well known concerts. And we’re up high on the list and part of it. Not a bad spot at all!”

He’s talking about Chisel’s spot at Hard Rock Calling this Friday, where they are third on the Hyde Park festival bill, above Iggy and The Stooges and behind Mars Volta and Soundgarden only.

It’s certainly a change of fortunes for a band who haven’t played north of the equator in almost three decades.

“We’re pretty excited, you know. Obviously we wish it hadn’t been quite so long but we’re just pretty grateful that after all these years we’ve still got a band that can still manage to play pretty well and pull a few crowds.” 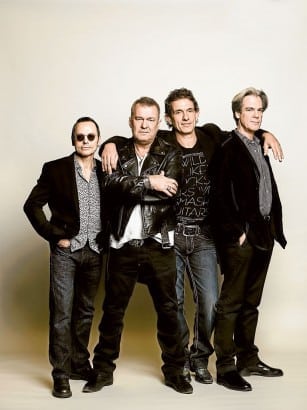 Cheap wine
While it may have been a long time between drinks in the UK for the guitarist’s famous band, there’s no chance of them being rusty. 2011 saw Cold Chisel go on an intensive tour of Australia that included 37 gigs in just 60 days.

“Our main preparation for the UK was our Light The Nitro tour, which went fantastically. That was our big try out with the new drummer [Charley Drayton], having lost Steve Prestwich early last year. And it couldn’t have gone better! The tickets, the venues, the consistency of the band from night to night, and more importantly the fact we all got on — it was a pretty intense tour that’s for sure.”

Band harmony hasn’t always been Cold Chisel’s strongest suit. Frontman Jimmy Barnes was renowned for walking out on the band during tours in the early days – so much so that Moss had to frequently add lead vocals to his guitarist duties. And while things may have changed a bit since the big sounds and bigger egos of the 1970s and 80s, Moss maintains that you still don’t have to be the best of friends to make great music.

When the war is over
“Cold Chisel is a band that may have some differences and doesn’t do a lot of hanging out together when we’re not on stage but first and foremost — whenever we do get on stage, we’ve got that ‘kids in a lolly shop’ kind of excitement feeling which seems to happen so easily, so readily and so consistently every time we get on stage.”

It’s that exact feeling that led them to write and record some of Australia’s most iconic rock classics. Think Cold Chisel and you will undoubtedly recall ‘Khe Sahn’, ‘Flame Trees’ or ‘Cheap Wine’ (or any other of their many, many hits). You’ll remember Barnes’ screaming solos, Moss’ rocking guitar riffs, Don Walker’s powerful lyrics and the precision of Prestwich on the drums. You’re likely to imagine packed Aussie dance floors; pubs, singlets, mullets and a couple of cold tinnies. They were the definitive Aussie band with the definitive Aussie sound. And in a lot of respects, they still are. Except instead of the talented Prestwich, who tragically passed away due to a brain tumour last year, they now have Drake banging the drums.

Remembering him forever now
Moss reckons Prestwich’s passing was a serious wake up call for the rest of the band.

“Hopefully a certain amount of all the macho bravado might have died off a bit [when Steve died] and perhaps everyone thought, ‘well, shit, anyone can go at any moment’. You just never know when your time is up. I think there was a certain amount of appreciation of – ‘enjoy it while you can because it’s not always going to happen to someone else, one day it’s going to happen to you’.” 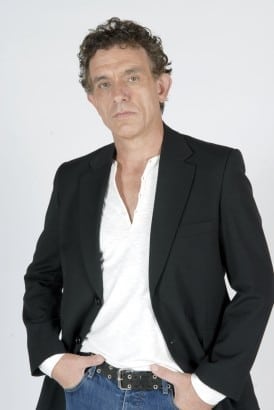 It’s at this point that I ask Ian Moss if there are any poignant regrets he holds for his Cold Chisel career.

“There’s a whole bunch of hindsight sort of things there. Not trying Europe and the US…it’s just one of those things where the band was really peaking and had just started touring overseas and possibly one of the issues was that we’d hit a nice level of comfort here in Australia.

“Guys had started with future wives and things like that and to really tackle America and Europe would have meant going back to the old grindstone of just the boys on the road — of sharing hotel rooms and doing it tough for quite a while. Maybe we just left that run a bit too late. Maybe if we’d done the right thing, the thing that AC/DC did…”

Standing on the outside
It’s here that Moss envisages Cold Chisel’s future taking on an AC/DC-like trajectory.

“They woke up real quick to that [the overseas market]. They started around the same time as us but they high-tailed it to England around late ‘77, early ‘78 and thought if this is going to be a grind, let’s not grind our guts out around Australia, let’s go overseas and do it there. Let’s get over there now and do it. In hindsight I wish we’d done something similar…”

But what of Cold Chisel’s phenomenal domestic success? Would he have risked their reputation, of them being one of the most loved and well known bands in Australia, for a chance of overseas glory?

“Given the chance again — I’d take the risk. AC/DC are certainly huge and loved here as well, they didn’t lose anything at all by not slogging it out in Oz for years and years.”

Water into wine
While Moss may lament what may have been, there is no denying that Cold Chisel are still huge, both back home and indeed, in the UK. They have legions of fans around the world and are almost as popular now as they were in their heyday. As well as their momentous Hard Rock Calling spot, the boys will be taking their classic Aussie sound around Britain, starting with the Shepherd’s Bush Empire on Wednesday night. And Moss is just as excited as playing to the army of SheBu expats as he is of sharing the Hyde Park stage with Chris Cornell and Iggy Pop.

“With a bit of luck there will be a lot of people and a lot of people who haven’t seen the band in a long time! We expect there to be a terrific and enthusiastic atmosphere and we’re ready to rise to that.”

They may have a new man behind the drums, a new mindset on life, and a newly found sobriety for some of the members — but when Cold Chisel board that last plane out of Sydney to take the London stage on Wednesday (and Friday) this week, those misfits will be the good old Chisel that we’re used to. They’ve got everything we want. They’ve got everything we need. And all they wanna do is make noise for you. Rock on Cold Chisel, rock on.

Favourite song of all-time: ‘Things We Said Today’ (The Beatles)

Favourite London activity: Play tourist and visit all the historic sights and museums and stuff like that.

Favourite pastime when not making music: Flying — I’ve got a pilot’s licence, I love to get up there and fly.