Harder, bigger, faster, stronger; Opus by Circa at the Barbican

One of the best contemporary circus companies in the world, has joined forces with one of the finest string quartets to bring you their biggest and most ambitious production yet. 'Opus' by Circa and Debussy String Quartet is playing at the Barbican in London from 18 February. 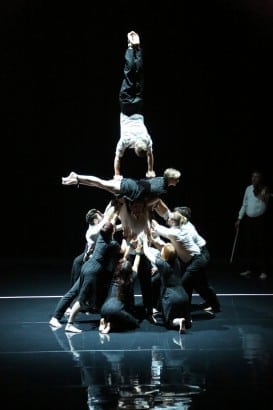 AUSTRALIAN contemporary circus company Circa are bringing their biggest and most ambitious show ever to London, the aptly titled Opus.

Fourteen acrobats (a Circa show usually has seven), plus a string quartet will take to the Barbican stage to do what Circa do best; make people feel something.

Lewie West, who has been performing with the company for six years, and is currently in Europe touring three different Circa shows including Opus, says: “It’s just my favourite show, because it feels so powerful.”

“It is undeniably a circus show, but it’s not like anything you’d think of when you think of circus,” he says.

“We have people crying midway through our show, and people being really touched and moved and thinking about things in a different way after they see this.”

Inspired by the music of Russian Dmitri Shostakovich, one of the 20th century’s greatest composers, Opus comprises three of his string quartets in their entirety.

“The music is incredibly powerful,” Lewie says. “It was written in Soviet Russia not too long ago. So it’s got all these themes and motifs about the KGB… It’s quite heavy and dark music in that sense.”

Performing Shostakovich’s masterpieces live on stage is the Debussy String Quartet, one of the finest sting quartets in the world. Renowned for their exciting performances and award winning recordings, Lewie says “we were very lucky to be able to steal them away every now and then to do this show.” 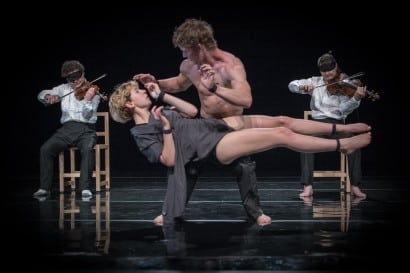 More than just providing a live soundtrack for the performance, the Debussy Quartet become part of the action and interact directly with the acrobats.

“We have one scene where they play almost an entire quartet completely blindfolded, with acrobatics happening all around them, over them and through them and they have to keep that focus while we’re thumping the floor.”

When performing in such close proximity to the quartet, Lewie says one of the biggest challenges for the performers is to be constantly aware not to surprise them or touch them accidentally.

“You can’t disturb the musicians and break the music because that’s what Opus is all about. So that’s definitely scary. That and the musical instruments are worth a lot of money, so you don’t want to be breaking those.”

No Circa show has a storyline, but thematically Opus explores the complex relationship between the individual and the group.

“It’s got a lot of big group acrobatic numbers that then break apart and leave one or two people on stage and then reform. So it’s about that kind of interaction,” Lewie says.

“This show wouldn’t work with just seven acrobats, because it needs to have that dynamic shift.”

Interestingly, this concept can be threaded through much of what circus, and Circa in particular are about.

“Everybody is both a solo artist and a strong group performer, and that’s one of Circa’s trademarks,” Lewie says. “Every acrobat could do a four or five minute duo with any of the other acrobats if they were asked to very quickly, as well as doing their own solo, as well as doing an act with 13 other people. So everyone works together in this show.” 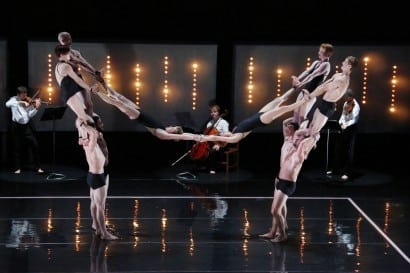 As the youngest of four brothers, Lewie says he grew up in a very “physical family” with a trampoline in the backyard. After training in gymnastics for a number of years, Lewie became more interested in circus after seeing a Circus Oz show.

After finishing school he moved from Canberra to Melbourne to study at the National Institute of Circus Arts (NICA), where he completed a three-year Bachelor course in Circus Arts. Upon graduating he was offered a position with Circa.

“I graduated and the next day I flew to Brisbane to join Circa and about two weeks after that I was doing my first international tour,” he says.

“I joined, and didn’t really know what I was getting into, and I’ve been with the company six years now and just love it. I think I managed to stumble into the best circus job I could possibly get.”

Having performed Opus in a number of European cities including Luxemburg, Barcelona, Dusseldorf, and in Lyon, where it premiered at the Les Nuits de FourviÃ¨re Festival in June 2013, Lewie says he is excited to be bringing the show to London.

“The Barbican is an amazing venue and I think Opus is going to look absolutely incredible there, so I’m really looking forward to it.”

Opus by Circa & Debussy String Quartet is on at the Barbican from 18th to 22nd February. Click here for more information and to buy tickets.