Official portrait of Duchess of Cambridge unveiled at NPG

The first official portrait of the Duchess of Cambridge by Paul Emsley has been unveiled to the public at the National Portrait Gallery, and is already diving opinion with its ‘realistic’ portrayal of Kate Middleton. 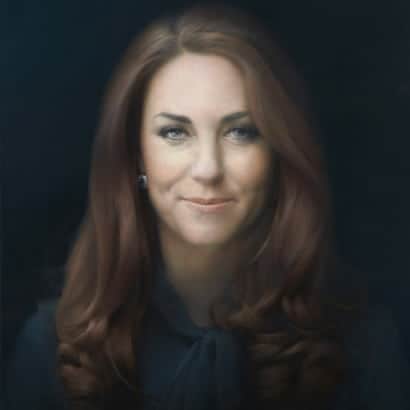 THE first official portrait of the Duchess of Cambridge has been unveiled to the public, and is already diving opinion with its ‘realistic’ portrayal of Kate Middleton.

Commissioned by the National Portrait Gallery, it was created by award-winning artist Paul Emsley after he was personally chosen by the Duchess from a shortlist of renowned painters. Paul Emsley is known for his true to life, almost ‘photographic’ style.

The head and shoulders portrait shows the subject staring directly at the audience, with a small smile on her face.

The painting was unveiled privately to family and friends this morning, before going on display to the public this afternoon. The Duchess attended the viewing, wearing a burgundy Whistles dress, accompanied by Prince William, her parents, Carole and Michael Middleton, and her brother and sister, James and Pippa.

Kate reportedly told the artist: “It’s just amazing, I thought it was brilliant.”

However, critics have not been as kind. The Daily Mail reports Robin Simon, editor of the British Art Journal, as saying that the Duchess of Cambridge looks nothing like the portrait in real life.

“I’m really sad to say this is a rotten portrait.”

The Daily Mail agree, stating the portrait makes the Duchess look far older than her 31 years.

“There are shadows and creases under her eyes while her famous brunette locks have a strangely coppery tinge to them.”

“Her mouth is set in a grimace rather than the promised enigmatic smile.”

In agreeing to the piece, the Duchess requested the portrait reflect her natural, not official, persona.

The artist has previously said of the work: “The Duchess explained to me that she would like to be portrayed naturally — her natural self — as opposed to her official self. She struck me as enormously open and generous and a very warm person.

“After initially feeling it was going to be an unsmiling portrait, I think it was the right choice in the end to have her smiling — that is really who she is.”

He said: “When you are painting someone with lines and wrinkles it is much easier as an artist to capture them as a person. Obviously she has none of that. But I tried to do that with her smile and hope I have succeeded.”

What do you think? Tell us below: