REVIEW | Well known for its excellent coffee and convivial hospitality, Lantana is already a stalwart favourite amongst the London Aussie expat crowd. However, as PADDY MCCRAE discovers, there is now another reason to add it to your list of regular haunts — the sublime ‘shin dig’ offered at their bi-weekly ‘Supper Club’. The delights of a dinner party, without any of the work.

by Paddy MacCrae
in Lifestyle 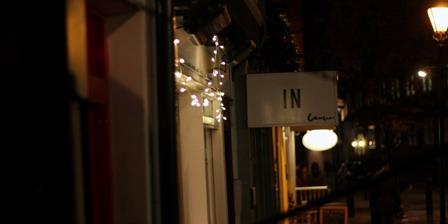 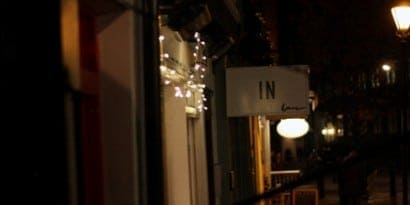 I DISCOVERED Lantana a while ago when a British friend took me there to escape a wintry London afternoon. He was raving about how good it was and after we sat down and got a coffee I had to admit — he was right. Inviting, tasteful, with great service and even better coffee, it felt, what’s the word … Australian.

Turns out, it is. And not only do they run a cracking little café during the day, but they’ve branched out in an effort to keep their chefs interested and open up twice a month as a sort of restaurant-cum-dinner party. They call it Supper Club.

I went to the last one not quite sure what to expect. I was glad to find that my favourite things about Lantana remained pretty much unchanged — service that’s friendly without being stuffy, a homely rustic charm and bloody good grub.

However, it wasn’t all the same.

My girlfriend and I, both semi-regulars, noticed differences as soon as we stepped in the door. It was more intimate, more atmospheric, and there was a sense that we were at an event.

Everyone was there for the one thing and for the one (set) menu. Rather than latte-sipping Londoners dashing in and out between meetings and shopping, work was done for the day and it was time to relax into the evening.

On arrival, we were offered a glass of Prosecco as we were shown to our table. It was a six-seater, and we were sharing with a group of three. First course was roasted butternut and apple soup, which was unexpected and warming. It had a slightly spicy kick, which was appropriate for the temperature outside, and was satisfying without destroying my appetite.

Main course was the true surprise. A 48 hour roasted shin of beef. That’s right, 48 hours. It was bought out on a communal dish and placed in the centre of our shared table, which meant that we had to negotiate cutting duties with our fellow diners. This could have been difficult, even awkward, as everyone worked out each other’s manners and the size of their stomachs, but it turned out to be a great way of getting us all talking. Up to that point we’d been two separate parties. As soon as the roast came out, we were yakking away like old mates. 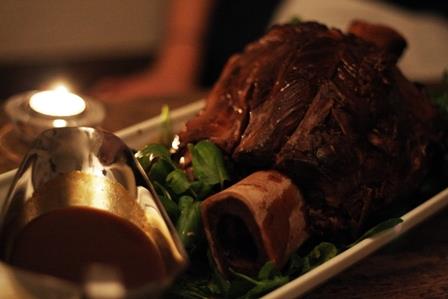 The roast itself was exceptional. The quality of the cut combined with the sheer time of roasting meant it fell away as you prodded it with your knife. It was hearty, tender, and cooked to perfection.

We opted to go with the chef’s recommendation on wine, which was the Beaujolais from Burgundy. It sat well with the food; it didn’t try to compete, but instead complemented the strength of the beef with a robust and earthy character. 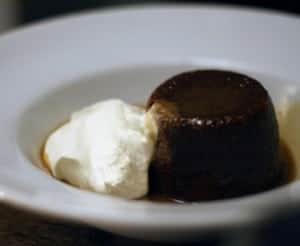 Desert was a sticky toffee pudding, which was pretty much as expected. Sweet, delicious, and served with cream. Of course we followed it with coffee (would anyone seriously choose tea?) and were more than satisfied.

The whole event reminded me of a dinner party from a Richard Curtis film. Maybe the one in Notting Hill, or something out of Love, Actually. Like a Christmas meal back at home, without the politics of the in-laws and the washing up. Oh, and better food too.

Remember that people aren’t coming off the street, breezing in and out while stressed waiters clear tables. Patrons (or, more accurately, guests) are there for the duration. The conversation flows, the wine list is intelligent and reasonable and the steady stream of mouth-watering dishes coming up the stairs from the galley below is almost flawless.

Back out in wintry London, after a few decent hours of good food and fine company, I found myself swept up in the atmosphere of expat Australian hospitality at its best and hoping this was not my last Supper Club.

Lantana hosts Supper Club every second Thursday night, restarting in Spring. To book a table or find out the menu for the next Supper Club email [email protected] or see www.lantanacafe.co.uk. 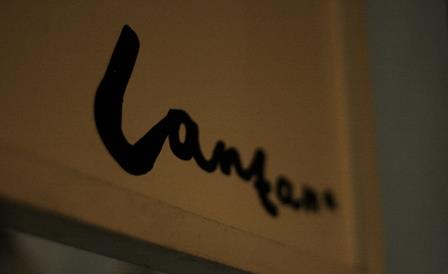