Cabaret star Dusty Limits on why he lost the Aussie accent

Dusty Limits, aka Mr Dorian Black, singer, comic and compere and has been called a “trailblazer” on the UK cabaret circuit. He is also originally from Australia. Here he tells us ‘what’s with the accent’ ahead of his Soho Theatre show. 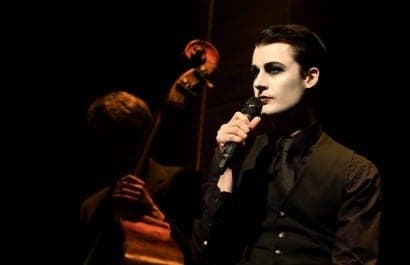 That’s the question I hear most from fellow Aussies who are over here temporarily. Shortly followed by: “You’re Australian? I would never have guessed. You sound British.”

The tone of these enquiries and observations ranges from appreciative to the accusatory. Some folks seem to think that the fact I speak RP (which stands for ‘received pronunciation’, not ‘real posh’ as someone once told me) is a thing to be proud of, while others feel an implicit slight on their own untarnished Aussie twang.

There are Aussies who’ve lived here far longer than I have who still sound exactly as they did when they got on the plane. And there are those who adopt Mockney inflexions before they’ve got through passport control. I love the warm current of mockery that runs through the Australian accent, the generous lilt that’s free of sentimentality. But I equally love the cast-iron understatement of the English. The Aussie has one advantage — the twang that carries over fields and cuts through the hubbub of a crowded pub, a useful thing when you make your living, as I do, belting out songs in cabarets full of drunks.

But as to ‘what’s with the accent’, it’s a character choice I made for Mr Dorian Black, aka Dusty Limits. Dusty is a Brit, born in the Highlands but educated in the south, and who therefore sounds (as one critic put it) like ‘a public school rent boy’. I explain his occasional lapses into what sounds suspiciously Brisvegas with the fact that he spent some time on Oz as a wayward teen, sent there by his disapproving parents.

In writing the show I’m performing at Soho Theatre, which is based on the idea of a musical obituary, I had to write an obituary for someone who doesn’t actually exist. I’ve lived the character for so long that ‘my’ accent has changed to ‘his’. More alarmingly, so has my life. I have to remind myself sometimes that I don’t actually have a twin sister. A shrink might make something of this. But then as Oscar Wilde probably said, our imaginary lives are so much more real than our ‘real’ ones.

Part of it is just habit. I am a dual national, and I’ve lived in the UK for 14 years. It’s my home far more than my ‘home town’. Going back to Oz feels like making a visit, not a return.

I sometimes find myself worrying: what if Oz becomes a republic? Might I have to make a choice? Which would I pick? For now I’m safe. If Tony Abbott gets into power I will pack my Australian passport away; I won’t be needing it for a while.

But my real worry is that Dusty Limits probably couldn’t exist in Australia. The danger is he’d stay too long, and he’d lose his accent.

Dusty Limits: Post-Mortem is a musical obituary celebrating a life lived badly performed by one of the UK’s most celebrated cabaret artists. It runs from 9 to 13 July at 9.30pm at the Soho Theatre Downstairs. Tickets are £10/15 and can be booked through the Soho Theatre website or by telephoning: 020 7478 0100.