A true labour of love at The Cinnamon Club

REVIEW | The quirky ‘Royal Labour of Love Menu’ at The Cinnamon Club is everything PAUL BLEAKLEY was expecting — a fusion of flavours packaged in a unique set menu that pays homage to the Duchess of Cambridge. 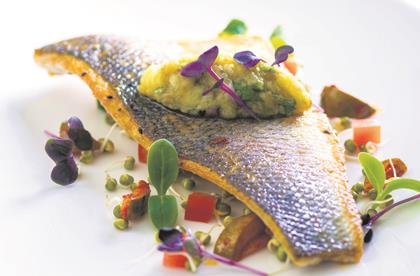 THE British love affair with the Royal family has been particularly noticeable in recent years, with high-profile events like Prince William’s marriage to Kate Middleton and the Diamond Jubilee proving the renewed appeal of the monarchy. With a royal baby now on the way, Westminster restaurant The Cinnamon Club has launched its brand new Royal Labour of Love Menu: a five-course feast designed to curb cravings, keep expectant mothers healthy and possibly even kick-start labour.

The Royal Labour of Love Menu, which is due to be launched in July, has been designed by Executive Chef Vivek Singh and Head Chef Rakesh Nair as a sumptuous display of modern Indian cuisine with each course matched with a stage of pregnancy, from an appetiser course called ‘Expecting’ to a dessert which has been labelled ‘Special Delivery’. Far from a clever gimmick, The Cinnamon Club’s Royal Labour of Love Menu is a highlight for food lovers and a triumph for a restaurant that has been called London’s best for Indian cuisine.

The Cinnamon Club is nestled in a quiet street only a short walk from the sights of Westminster Abbey and the Houses of Parliament. This is not Brick Lane: there are no flickering neon signs drawing you in to this culinary gem. As soon as the staff usher you onto the restaurant floor, it is clear that this is a particularly special experience. Located in Grade-II listed Old Westminster Library, The Cinnamon Club has taken something old and transformed it into a fresh and unique dining experience while still retaining the nostalgia of the original building.

It is difficult to fault the service at The Cinnamon Club. The staff on the floor work as a team in a way that is rarely seen at even the most high quality restaurants, each performing their tasks quickly and efficiently. Our chief waiter was not shy in making recommendations for side dishes to supplement our meal, and showed a clear knowledge of every item of food that came to the table. The sommelier chose the perfect wine to counteract the strong flavours of the food, bringing a bottle of Torte Solaria Primitivo to the table moments after we indicated that we were in the market for a drop of red.

The menu kicks off with an appetiser course called ‘Expecting’, which consists of chargrilled black bream fillet with hot mango pickle and aubergine chutney. This course reflects the best fusion between British and Indian cuisine, with a fillet of fish cooked to perfection. Unlike some restaurants, the bream held its consistency on the plate while literally melting in the mouth. The aubergine chutney was a surprising stand-out, with a smooth and fluffy texture that off-sets the spice of the hot mango pickle.

The second course — a starter which has been called ‘9 Months’ — is tandoori black leg chicken breast with fenugreek crust and smoked paprika raita. It was at this point that we knew that we were in for more than we had bargained for: if something of this quality was a starter, the best was yet to come. The triumph of this starter was the perfection with which the chicken breast was cooked, cooked with consistency throughout. The traditional tandoori flavours were well-supported by a mango sauce described by my dining partner as “to die for” and “reminiscent of the first mango of the summer”.

The ‘rest course’ — a green apple and mint sorbet called ‘And Breathe’ — kept up the theme of unexpectedly fresh flavour. The first bite of the sorbet confirmed the chef’s profound ability to bring out strong tastes. Eating that sorbet reminded me quite a bit of the original Willy Wonka film, at the part in which the characters eat candy that tastes exactly like the food that it is supposed to. The sorbet tasted exactly like a green apple, although the expected mint flavours were minimal and overpowered by other strong tastes.

The main course — ‘Overdue’ — was more of what I have come to expect of Indian cuisine: a Rajasthani fiery Herdwick lamb curry with chickpea bread, which was brought out with a side of The Cinnamon Club’s specialty black lentils. The lamb in this curry was some of the best that I have ever tasted, soft to cut and mouth-watering to eat. The lamb retained its flavours despite the overwhelming spice of the curry sauce, which increased in intensity with each bite. The curry dish was perhaps slightly too spicy for a set menu, however I truly savoured every last morsel.

The final course is a dessert which the restaurant has called ‘Special Delivery’: mango srikhand with roast figs and gum arabic crumble. I was not quite sure what to expect from srikhand, and at first found the flavours to be a notably muted denouement after the intensity of the main course. The mango srikhand was reminiscent of ‘dessert chutney’, transformed into smoothly textured yoghurt. As the strong flavours of the lamb curry faded, however, the true tastes of the mango srikhand were revealed and, by the time I had finished, I had come to enjoy this final offering.

Absolutely recommended. Despite the price-tag of £45, the Royal Labour of Love Menu is a feast that it is difficult to forget. If there was to be one criticism, I would say that enjoying this set menu at The Cinnamon Club has set my dining expectations higher than could possibly be exceeded.