The joy of public speaking

ASTUTE AUSSIE IN LONDON | Just the idea of speaking in public is enough to make many of us break out into a cold sweat. But what are we actually so afraid of? Here we highlight some of the common reasons why we become so scared of public speaking, and suggest antidotes to help you feel more confident. 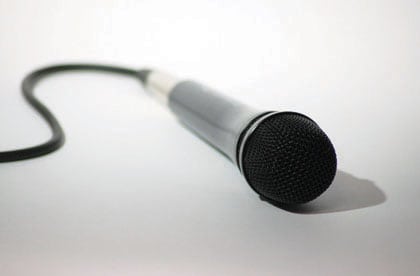 I REALLY enjoy presenting and public speaking. But, to many, speaking in front of an audience is a fate worse than death. One of my favourite Seinfeld moments is when Jerry says: “According to most studies, people’s number one fear is public speaking. Number two is death. Death is number two. Does that sound right? This means to the average person, if you go to a funeral, you’re better off in the casket than doing the eulogy.” But what is it that causes such a fear of speaking, when it’s something we do every day?

Fear is not completely counterproductive. Like all behaviour, it’s designed to protect us from danger; the fight or flight response is a large part of what has helped humans survive and flourish. When we are confronted with danger the response helps us extricate ourselves and live to tell the tale. But fears that are not grounded in reality can cause anxiety and develop into phobias. Standing in front of a group of people and speaking, for example, is not in itself a dangerous act – there is little real risk of physical injury or harm. However, neuroscientists have discovered that the mental pain we feel is just as strong as physical pain, and this is one reason why the danger of public speaking seems so real for many.

Some reasons cited for fear of public speaking, and their related antidotes, include:

1. Past experiences: Humans like to predict possible outcomes according to past experiences. If we have previously had a negative public speaking experience the brain can form cause-effect patterns, which can mean that we expect the bad pattern to repeat over and over again.

Antidote: Get support to break the cause-effect cycle. Presentation coaching is a great way to get a programme that will best meet your needs. You can also join speaking clubs, such as Toastmasters International, which provide a supportive environment in which to practice speaking.

2. Our self concept: This is the sum total of beliefs people have about themselves. Self-descriptions help us define who we are – the “clever scholar”, the “outgoing Aussie”, the “introvert”. When there is a mismatch between how people see themselves and how they think they ought to be, the incongruence can lower their confidence. For example, if someone thinks they cannot speak as eloquently or humorously as they should, they can develop a fear of public speaking.

Antidote: Low confidence can be overcome with specialist support and training, such as coaching, counselling or psychotherapy. A healthy self-concept can remove the pressure to meet unrealistic expectations and put the fun into public speaking.

3. Not being prepared: Inadequate preparation of content, structure and style can cause uncertainty about what will happen during speech, and uncertainty often leads to fear.

Some things in life are designed to cause fear, such as great white sharks, dangerous jelly fish and stingrays, and we survive by taking the hint and removing ourselves from the potential danger. Unlike the fears designed to perpetuate the human race, public speaking is one that can be overcome with the proper support, training and preparation. So heed the tips, get out there and become a fearless speaker yourself.