EDINBURGH EXPAT | Part one: Our resident expat shares the best places in Edinburgh to soak up that Vitamin D. 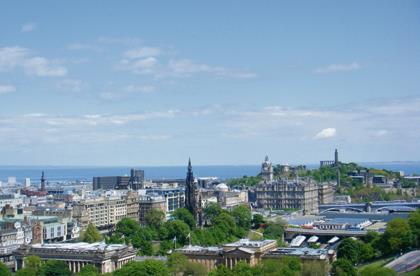 Now I don’t know if you’ve noticed, but much of what I say in this column could be mistaken for the incessant ranting of a grumpy old man. An unfair comparison I think, I’m not old.

Admittedly however I do have a lot to say about the Scottish weather, particularly the weather here in Edinburgh. It has been rainier, windier and colder than I ever imagined and yet when I flick through my catalogue of memories those that standout most all seem to share one common feature- the sun.

You know what they say: when it rains, it pours, and there has been more than enough of that this season. However, what needs to be said about the sun here in Edinburgh is that when it does eventually shine, it brings the city to life.

So if you do happen to find yourself in the Scottish capital on one of these rare cloudless days, here is a two part column which outlines a few things you could do to take full advantage.

First things first: go out and buy yourself lottery ticket because you’ve just beat the odds.

Let’s start with something Aussies do best: a BBQ in the park. Ok, so it won’t be exactly the same as home. You don’t have to fear that a rogue hot coal could lead to a national disaster for one thing.

Dust off the cricket bat, stop off at Tesco for some snags and make your way to the Meadows. If you don’t know how to find the Meadows in Edinburgh, don’t look for a career in orienteering.  Then open a map. See that giant crater of empty space in the centre of a dense urban jungle? Head towards it. Welcome to the Meadows. Here you will meet half the population of Edinburgh as they bask in the sunshine.

From here you are just a few clicks away from that other slice of giant open space, Arthur’s Seat. The top of this extinct volcano of historical and cultural significance is where you go for the official postcard panorama of Edinburgh. It’s like the London Eye, except free.

Remember, you haven’t made it to the Highlands just yet – this is not a mountain, it is a hill – so the climb isn’t strenuous and should make for a great half day activity. Other picturesque inclines include Blackford Hill and Calton Hill and all are worth visiting to see Edinburgh’s grey stone architecture pop against a backdrop of blue sky.

Once you’ve climbed a volcano (you know, that ole chestnut) you might want to dip your feet in the ocean. That’s right, Edinburgh has a beach, though we use the term loosely. Still, from the city centre head to Portobello where you will see people splashing away in the water, playing Frisbee and sunbathing like it’s the most normal thing in the world.

But be warned. The beach is where you will meet the other half of the city’s population so queuing for the bus back to town might take a while.

Finally, finish the day with a bit of alfresco dining; when the sun makes an appearance so do chairs on the sidewalk outside a number of cafés and pubs. Of course, sunshine is in high demand so if you are hoping for a seat you may be forced to order a meal along with your mid-afternoon pints. In any case, do it. Who knows when you’ll next get the chance?