THE EXPAT FACTOR | Rugby legend Michael Lynagh won the World Cup with the Wallabies and captained the team from 1993-1995. He survived 72 internationals but perhaps his toughest test has been making what he calls a ‘miraculous’ recovery from a life threatening stroke. Now just one year since the fright Lynagh is preparing to participate in the London Marathon, raising money for the Stroke Association. He took time out to fill us in on the story. 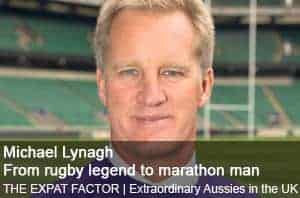 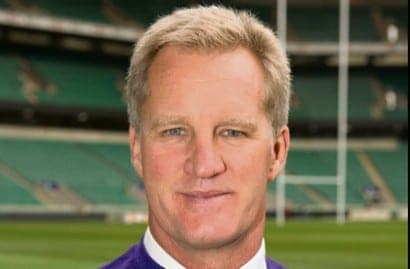 I first came to the UK in 1996. I had retired from Australian rugby in 1995 following the World Cup where Australia lost to England in the Quarter Finals, and I went to Italy to play the 1995/1996 season there. In August 1996 I moved to the UK to join Saracens Football Club to play rugby with them.

My motivation was twofold. The main reason was I had just married my wife, who is Italian, and we thought England was a good middle ground — a neutral stadium. We thought we would come and settle here for a few years and see what happened. It would let us create something as a couple, as opposed to trying to forge being an Italian in Australia or an Australian in Italy. Secondly I met Nigel Wray, Chairman of Saracens, who outlined his ideas for the club. I liked him, I liked his ideas and it sounded like a good fit. Since we’re still here, it’s worked out in a way.

It’s funny, because when I came here professionalism in rugby was a kind of toe in the water approach. It was a long way from where it is now. In Australia, although I played in an amateur era, it was very much about trying new things and looking at different ways of doing things in the sport. In the UK it was very much, well this is the way we do things here, it’s the way we’ve always done things and the way we’re going to keep doing things — that sort of approach. You don’t want to be the brash Australian coming in and changing everything but there was a way to gradually integrate a different style.

Two weeks after I finished playing with Saracens in May 1998 I started working for a commercial property investment company in the West End. I don’t regret retiring at all. I was 34 and I was ready to move on to the next part of my life. I had played since I was 18, so it was a long time. I keep involved in rugby through Sky, and that’s about the level I enjoy.

For Sky Sports I do all the southern hemisphere rugby. Super Rugby, the Autumn Internationals, club rugby, the Heineken Cup — it’s a year round job. I do the studio work here in London every Friday and Saturday morning at 6.30am. It’s a lot of early mornings with the time difference. I’m not allowed to go for a particular team in the Super Rugby, but being a Queenslander and having played 100 games for them, I do have a little bit of a soft spot for the Reds.

I love being in London. I like the vibrancy of it — all the restaurants, theatre and music. We live near Richmond Park, and I love walking around the river there. Of course, I like my sport, so I enjoy all the English traditions that exist around sport, such as Wimbledon, the annual Boat Race and Ascot every now and again. It’s just one thing after another. I love going to watch the cricket and I’m looking forward to the Ashes. To be able to go to The Oval or Lord’s to watch the cricket is something a lot of Australians dream of doing, and it’s all right on our doorstop.

Of course, whenever England is playing Australia in a sport I get teased or there’s some friendly banter. I get very nervous actually; more nervous than when I used to play rugby. My life is not much fun if we lose, so for the Wallabies to win — it really does mean something! It makes life a little easier. The English are getting a bit confident about the Ashes. I’m sure we’ll be able to get some kind of squad together by then and be competitive. We always are.

Apart from friends and family of course, I do miss the general way of life in Australia centered around the beach. I miss the ocean and being able to go down at any time in the year and have a surf and just hang out. I regret the fact my kids won’t have the same sort of upbringing that I, and a lot of other Australian kids, had — it’s an active lifestyle in Australia. You can be in the city in the morning and then at the beach or on the harbour in the afternoon. However, they benefit in other ways here in the UK. One day I’d like to take the boys back to give them a taste of where I came from. The longer you stay in a place though the harder it is to move, and the more entrenched you become. I’ve got no plans to go back, but never say never.

I had a stroke in April last year. I was in Australia at the time, and I had no warning. It was just one of those freak things. I was very unaware it happens to young people, younger than me, and people who are relatively fit too. I was one of the lucky ones to both survive, and be relatively unscathed out the other end. I have a few issues I have to deal with, but physically I’m in reasonably good shape. My sight is down 50%, but I still function. Really, I shouldn’t be able to talk correctly. I shouldn’t be able to use my hands, and legs, and I shouldn’t be able to see very well because it should have affected the whole left side of my body. I have met people who have had similar things to me, and they’re not in great shape and struggling a bit. The doctors don’t understand why I wasn’t affected like that — it’s a bit of a miracle really, but I’ll take it.

If you had told me this time last year I was going to be doing a marathon, I would have been happy just being alive let along contemplating running 42kms

I’m participating in the London Marathon this Sunday to raise money for the Stroke Association. A team of us from Sky Sports are doing it. It was James Gemmell’s idea, a presenter I work with at Sky Sports. He had a family friend who passed away after a stroke and asked if I would like to support him. In a moment of weakness I said I’d do it with him. It’s a completely different type of fitness to rugby. Rugby is about short, sharp, explosive bursts, and in the marathon you have to sustain a speed for a long period of time. Last time I did a marathon in 2000 I really had to retrain my body, and being short and stocky I don’t have a natural runners build. Now add 13 years, bad knees and worse joints, and a stroke to boot. It’s not going to be easy, but as long as I finish the marathon on the same day as I started I’ll be happy. The marathon is on 21 April, and the stroke happened on 16 April, so it’s almost a year to the day. If you had told me this time last year I was going to be doing a marathon, I would have been happy just being alive let along contemplating running 42kms.

The money we raise for the Stroke Association will be going towards a specific Back to Work project for stroke sufferers. It will employ a number of therapists and people who can help stroke sufferers get back into the workforce. People who suffer strokes are often not in the same position they were. Apart from the physical effects there may be depression and feelings of low self-worth. Getting people back to work is a big part of the recovery process so you can feel you’re contributing to your community and contributing to your family. It gives you that reason get out of bed in the morning.

To support the Sky Sports team go to justgiving.com/teamskyforstroke. For more information on the marathon see virginlondonmarathon.com.