It’s all monkey business in the office

ASTUTE AUSSIE IN LONDON | If you have ever been told to stop monkeying around at work, it may be harder than you think. Are we a bunch of chimpanzees running around the office? 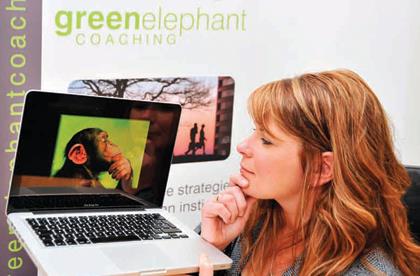 IF you have ever been told to stop monkeying around at work, it may be harder than you think. Are we a bunch of chimpanzees running around the office? Not exactly, but we’re close. We share DNA with chimpanzees, and we also seem to have very similar instincts and socialisation habits. Entrepreneur Clare Robinson, UK’s only Accredited Practitioner of Hardwired Humans, says that – like any other species on the planet – we are driven by powerful instincts, i.e. behaviour we are born with rather than behaviour we learn as we develop. Whether at home or in the office, our instincts never leave us.

Robinson has always had a passion for animals and human behaviour, which led her to explore Human Instinct Psychology, a branch of Evolutionary Psychology that considers how we are as a species, how we evolved and the effects on our behaviour. The theory is that moving into groups, such as within a family, is based on an instinctual need to gel and stick together.

When it comes to the workplace, water-cooler gossip is more than just a way of getting you away from your desk; according to Human Instinct Psychology, gossiping is important to our survival. For millions of years, we have gathered and shared information. If there is imminent danger, we want to know about it and share it with those we care about. As chimpanzees groom each other to build alliances and friendships, we chat and gossip. By understanding the instincts around how and why we form alliances, Robinson says that we can gain useful information to facilitate change management, restructures and reorganisations. “We know how people are going to react to the change, how we need to communicate within that, how they need their hierarchy and structures,” she says.

There are also similarities in leadership styles between us and chimpanzees. For example, the alpha male chimpanzee is aggressive, dominant and uses fear to get what he wants, but males coming up the ranks challenge him and eventually take over. Robinson suggests that, in the workplace, this behaviour translates into an executive who is difficult, likes to develop silos and is eventually removed. Chimpanzees who use their strength and dominance in softer, more gentler ways, with a more passive and structured leadership approach, tend to remain in their positions for longer. Similarly, humans who lead in a more collegiate manner are altogether more successful.

It therefore makes sense that Robinson holds her leadership programme in Edinburgh Zoo. Being away from the office environment, delegates start to recognise how certain behaviours are instinctual, and with lessons in human instincts coupled with a Zookeeper’s explanation of chimpanzee behaviour delegates start to join up the dots; observing the lead chimpanzee sitting on the largest rock with his abundance of fruit and food reminds delegates of a company CEO. Robinson says that, just like the lead chimpanzee, “the higher up in the hierarchy that individuals are, the more they want to surround themselves by the best office, the best views, the biggest desk chair and the biggest pot plant”. It’s instinct.

So it seems that, despite moving out of trees and into high rise offices, we are not far removed from our nearest cousins. So next time someone is monkeying around at work remember – they may just be acting on instinct.

Clare Robinson is the UK’s only Accredited Practitioner of Hardwired Humans, and is the Director and Personal Development Coach at Green Elephant Coaching. She will be sharing some of the secrets of human instincts with business leaders, managers and HR professionals when she launches the Human Instincts at Work programme.  The programme will start with the launch of a two-day leadership training programme held at Edinburgh Zoo in November.  You can find out more at www.greenelephantcoaching.co.uk