EDINBURGH EXPAT | The Edinburgh International Science Festival looks to the future as it celebrates its 25th birthday. 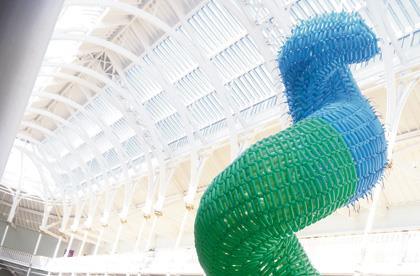 HERE we are, smack-bang in the middle of the Edinburgh International Science Festival as it celebrates its 25th year. It’s just like any party I can remember from high school – I could never get into those without paying someone at the door either. Also there are balloons, food and entertainment, though not in the way you would expect.

What an exciting week it has been so far. We’ve had live ice demonstrations, heard discussions on the topic of sun patterns, experimented with aerodynamics — and that’s just the weather. Events at this year’s festival are much more likely to surprise you.

Far too fanatic for the humble ice sculpture swan, the Science Festival celebrates its birthday with a specially commissioned centrepiece — a three-story high double helix structure, made from hundreds of interwoven balloons, now sitting in the National Museum of Scotland. New York-based artist Jason Hackenwerth and his team have been working frantically in the public eye over the past week to create the biggest visual spectacle the Festival has ever seen. The finished product is impressive, I guess, but the real joy comes from imagining the creative ways in which they will dispose of it. With that many balloons only one thing is certain – there’s going to be more popping than at a Pringles party.

What else is on the menu? Well, funny you should use that word because a fair portion of this year’s festival revolves around the theme of Future Foods. As it turns out, if we want there to be a future, it might be an idea to start preparing our palates for the sustainable cuisine of tomorrow.

Fried locust anyone? Curried grubs? Synthetic steaks? I imagine these are the delicacies on offer as part of the events such as Eating Aliens and The Adaptation Diet. I can only imagine because, honestly, I’ve steered clear. Not one for exotic tastes, I’ll just stick to eating my fill of minced heart, liver and lungs stuffed into a sheep’s stomach, thank you very much.

If you do decide to try the cane toad soufflé (probably not a real thing), don’t fill up on bread – you might have trouble participating in the party games. Future Worlds is yet another theme and offers entertainment that is not so much light as it is weightless.

Fit for Orbit will help you determine if you have got what it takes to travel into space. The health risks of such a journey include bone demineralisation, body salts to crystallise in the kidney, anaemia, heart damage, blindness and cancer, but I’d be more worried about going all that way just to be Buzz Aldrin-ed at the finish line.

Yep, science has certainly come a long way in 25 years. From the invention of the internet, to the Hubble Space Telescope, the discovery of the Higgs Boson (I’m guessing it’s some kind of ferocious Zimbabwean plant?) to understanding the physics behind Rolf Harris’s wobble board technique.

To put it in perspective, I too am turning twenty five this year. I have just learnt how to make pesto. Still waiting on that Nobel Prize.