The menu may have taken me by surprise, the pronunciation of its location may send me into paroxysms of inadequacy, and I may even have stepped on a dog — but The Providores was still an excellent experience and one Coffee Cult plans to repeat, if we can brave the lines of those wanting to do the same. 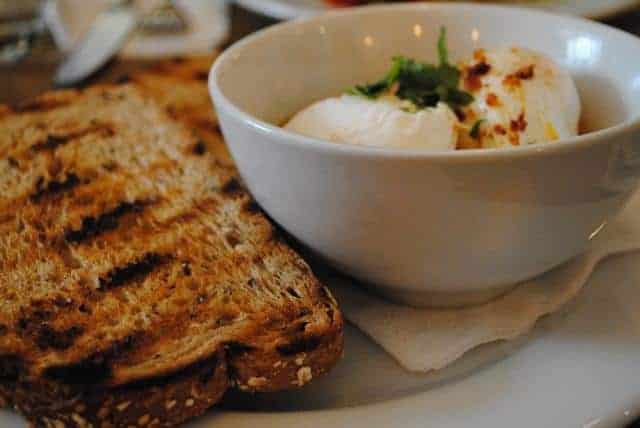 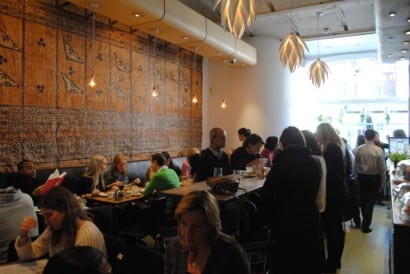 IT IS not ok to bring a dog to The Providores. I know this because squeezing into the busy ground floor Tapa Room I stood on one. The sausage of a thing was unhappily attached to a talking fur coat who was simultaneously lingering in the small entrance way whilst loudly declaring her rush to get to a beauty appointment.

Late, having missed the memo about leather leggings being breakfast wear du jour in Marylebone, and to be honest, more in need of a bacon buttie than something that came with a side of vanilla verjus syrup, I just wanted to get seated and get caffeinated.

What the dog wanted to do (besides be anywhere else than a crowded café on a busy Saturday morning) was be a buffer between the floor and my tattered boot.

The dog won. I had three excellent coffees to compensate, and the rest of the experience was an overcaffeinated, hectic, enjoyable haze.

If The Providores were a person, it would not be one who exuded an aura of calm — talking in soft tones about meditative moments spent in silent yoga retreats. She would be ambitious and brash, exciting and innovative. Loud, confident, better dressed than me and always in a rush. One of those annoying people who could spontaneously throw salmon paste in with pine nuts and mandarin juice and have it look like something out of Nigella, and taste like something from The Fat Duck. You would simultaneously hate her, and always want to be in her company.

It is for this reason that The Providores already has a strong cult-like following amongst Londoners who like their food to surprise as well as satisfy. Queues often form early on the weekend for the chance to sample the eclectic brunch menu offered at the downstairs Tapa Room — named after the traditional wall hanging making a feeble attempt to soften the rising din of the crowded room.

People are squeezed on sitdown tables around the edges, and along two long benches in the middle. It is a place where your proximity to your neighbour is such you can’t help but notice they’re also Australian, and therefore bond over your mutual appreciation of brunch and the 2-4-1 cocktails at the nearby Marylebone.

The brunch menu changes every month, although it seems a stalwart of the menu is the poached eggs with whipped yogurt — two perfect circles floating in a hot chilli butter bath. It turns out to be ten times more delicious and restorative than a bacon buttie, and infinitely classier. A new post Friday night drinks fixer-upper. 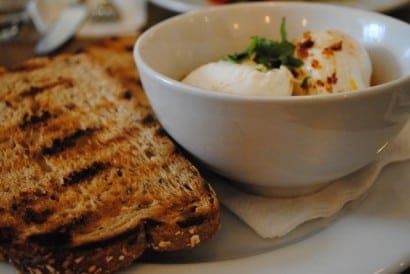 Similarly, the other items of the menu take your classic breakfast fare, and add a twist. The menu swims with words I don’t understand, and — like Marylebone itself — can’t pronounce correctly (is it Maaarlyebone, or Mairlyebone?)

At least the appearance of two soft-boiled eggs with vegemite soldiers on the menu offers that little touch of familiarity, as does the puffy muffins and pastries lining the bench.

The Providores is co-owned and run by Peter Gordon and Michael McGrath who both bring a strong Antipodean influence to bear on the operation — not least in the extensive New Zealand wine menu offered alongside the lunch and dinner menu. Peter was born in New Zealand before moving to Melbourne to study cookery and hone his skills. He started The Providores with co-owner Michael — a native Londoner who emigrated to NZ at fourteen, before working in restaurants in Sydney before returning to London.

The menu may have taken me by surprise, the pronunciation of its location may send me into paroxysms of inadequacy, and I may even have stepped on a dog — but it was still an excellent experience and one Coffee Cult plans to repeat, if we can brave the lines of those wanting to do the same. 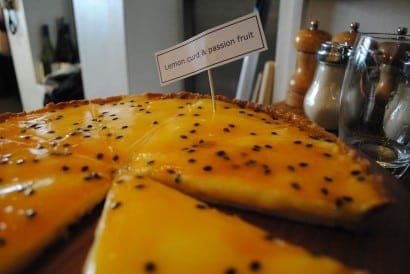