When in the heart of Welsh capital Cardiff and find yourself in the need for a late-afternoon caffeine fix, The Plan provides the solution. 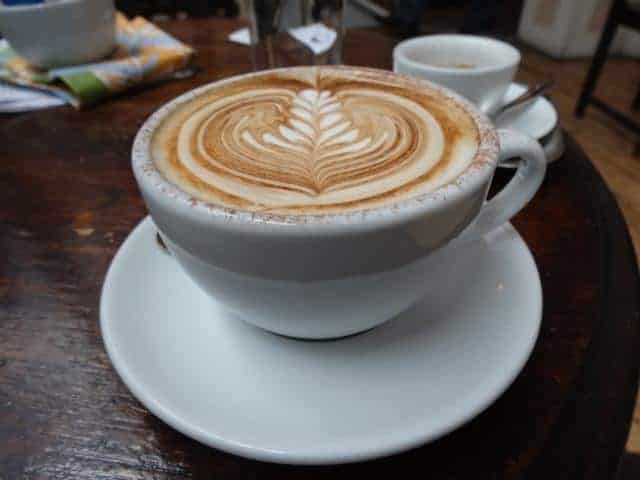 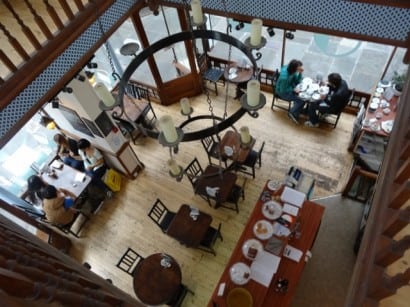 WHEN in the heart of Welsh capital Cardiff, the task of navigating your way through its many funky arcades packed with boutique stores eventually warrants the need for a late-afternoon caffeine fix.

Faced with this dilemma (and also, trying to find my bearings) during a post-Glastonbury stopover at the beginning of this month, a quick search on Beanhunter found that I was only a short stroll away from the The Plan Café in Morgan Arcade.  User reviews had described the Riverside venue as ‘a little oasis in Cardiff’, and guaranteed that as long as you visited on a weekday and head barista Trevor Hyam was in the house, you would be buzzing after one of his brews.

The decision was made to follow the gospel and head down the Stairway (or should that be alleyway) to Trevor, and hope he wasn’t cleaning out the machine and done for the day.

Good news on both fronts. Upon entry, a scattering of punters were having some afternoon munchies on the bottom level, and the smiling semi-bald man in a black-and-white-chequered shirt behind the counter revealed himself as the much-hyped coffee craftsman.

A brief chat ensued before I was invited to take a seat and check out the menu, kick-starting what would become a pretty pleasant stopover in a unique little hub.

Sitting by the window in a two-story café smack-bang in the middle of a semi-bustling arcade definitely gave the feeling that you were in a little bubble (or ‘Oasis’ as described on Beanhunter) compared to the surroundings outside.

Although nobody was up there given the time of day, a peak at the upper level and it felt more like a restaurant setting, perfect for a bite of lunch.  Downstairs, although filled with some pretty standard décor, definitely felt cosier and more informal, with the flashing lights underneath the bar gave off an added cool vibe.

The place was also (understandably) happy to show off its honours –  a handful of Trevor’s certificates from various barista competitions hung behind the counter, as did little signs mentioning the café’s inclusion in The Independent and The Guardian‘s lists of the top 50 cafes in the UK.

A desire to find the essence of a good coffee and also indulge with my regular beverage of choice resulted in two caffeine fixes being ordered — a single espresso (£1.65) and a mocha (£2.75), both of which Trevor brought over to me freshly produced and on a nicely-presented tray.

Made of a blend of beans from Ethiopia and Guatemala, the Espresso had a citrus-like bitterness to it and a bit of weird aftertaste. Nonetheless, in terms of perking one up, it definitely did its job and I was feeling pretty alert five minutes later. 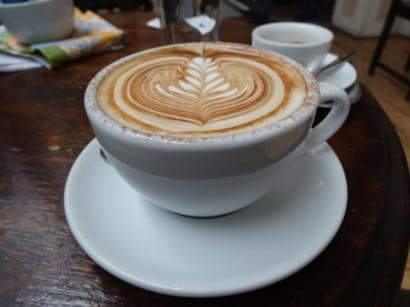 On the other hand, my delicious Mocha ticked all the right boxes.  It was creamy, not ridiculously hot and had a great mix of flavours, with neither the chocolate nor coffee overpowering one another.  To finish off, the presentation was superb as well, with a nicely-dusted choc topping and a leaf/fern design staying on top and intact as I got to the bottom of my cup.

While Coffee Cult stuck purely to the beverages, plenty of sweet food options such as cakes and biscuits are available to order, along with breakfast and lunch at various stages during the day.

Hmmm… as outlined up top, does finding this café through Beanhunter count?  The organisation proudly declares on their website they are ‘Made in Melbourne, Australia’ — proving users’ desire to find great coffee extends far beyond Australia’s capital of latte lovers!

While there isn’t too much to compare it with, the fact that you have a two level café with passionately made coffee in the middle of an arcade are solid enough reasons to take a peak inside The Plan.  It’s conveniently located for music buffs as well — Spillers Records (dubbed ‘the oldest record store in the world’) is right next door, as is the local arm of former Oasis and now Beady Eye frontman Liam Gallagher’s ‘Pretty Green’ clothing chain.  If you need to recharge and rest the legs after stomping around the nearby Castle (or any other part of the CBD for that matter), sticking to The Plan will bring some satisfying dividends.