Pimlico Fresh in Pimlico (believe it or not), has established itself as 'the cafe' in this rather inconspicuous part of London. They may not be breaking any new ground in terms of menu, but Coffee Cult discovered they are breaking records in terms of service. 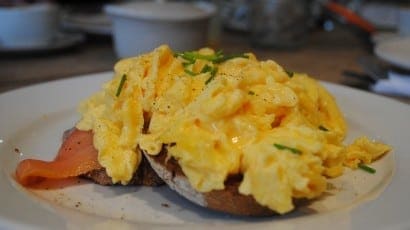 I have a long commute. Well, not long by Sydney standards, but long enough in London to make Tube travel on the weekend an unfavorable prospect. Every weekday morning I head off along the Victoria line, chugging along amongst a sea of bobbing heads, mentally ticking off a now familiar litany of stations. Somewhere after the moshpit of Highbury Islington, out empties half the carriage at Oxford Circus, another half again at Victoria.

Then we pull into Pimlico, and nothing much happens. No one really gets on, and no one gets off. Commuters carry on to be transported across the river, oblivious to the goings-on above ground at this quiet station.

So come the weekend I’ve decided to venture further afield than the usual 2km radius from my house, and better understand the route I take every day to work. The harried commuters are gone, although Oxford Circus is still abuzz with the comings and goings of weekend shoppers. Pimlico arrives, and I venture forth. A lone soul seeking out the curiosities that lie above.

Pimlico is a small slice of the suburbs in the heart of a big city. Ordered streets, well-tended gardens, and a set of shops with a decidedly local neighbourhood feel. It brings to mind the structured surburbia of Sydney. The set of shops forming the focal point of the local community, radiating out from the centre. Hit the circumference and you’re at once amongst the busy construction site of Victoria station, or the well-to-do shopping streets of Belgravia. However, back at its heart, it’s just locals buying their weekend camembert from the cheese shop, and artichoke slices from the market. 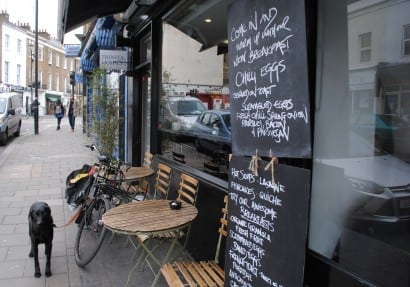 Small wonder then that buzzy Pimlico Fresh is very much a local deli/casual café. Residents stopping by for a fresh salad from the deli counter and takeaway coffee, or crowding into the few seats with their babies, and dogs; spreading their bags and newspapers across the main communal table before considering the options chalked up on the wall.

The coffee is … pretty. Can I leave it at that? The flat white has a perfect rosetta, but is slightly burnt and bitter. Perhaps a one off, as Pimlico Fresh has all the hallmarks of a place that should know what they’re doing in the coffee department.

The menu is not extensive, but has the basics covered. Eggs on toast and baked eggs, porridge and French toast all feature. No bells and whistles really — just big plates of hearty breakfasts, served up with efficiency.

In fact, so much efficiency that there’s barely enough time between placing my order at the counter, and having a creamy plate of scrambled eggs on thick slices of toast placed in front of me to cover with my companion the two introductory topics of any UK conversation — the weather, and the means of transport used to arrive at said location. I manage to cover both in between polishing off my entire meal, plus half of hers — soft avocado salsa and cherry tomatoes smushed onto grainy bread. 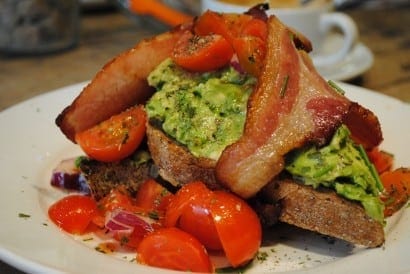 Australian. Finally. Weeks of being shown up by New Zealanders, and Coffee Cult is back on track. Pimlico Fresh is Australian owned (though we weren’t able to source a name) and entirely staffed by Australians and New Zealanders — apparently admired by the owner for their work ethic.

If I were a local, I’m sure this would be a favourite. So much so that the mainly Aussie staff would know my name and coffee order without asking. I would hide on the small back table with my weekend papers, and dwell over big plates of fresh eggs brought to my table with smiling efficiency. As it is, I’m not a local. So I’ll leave these Pimlicans to their canines and chatter, and whiz back up to the nor-east with a full belly and a story to tell of my adventures down south.