Nude Espresso is a place of familiarity, like receiving a warm hug from an Antipodean relative. It's a place where visiting family can be eased into London life; or of casual lunches with friends and morning after breakfasts, before wandering on to nearby Brick Lane. 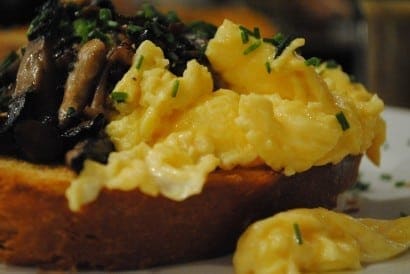 NUDE Espresso has two locations — Brick Lane and Soho Square. A more in-depth reviewer could have visited both to compare how the different character of the areas may have influenced the everyday operation of a single concept in terms of produce, style and clientÃ¨le.

As it were, it was breakfast, Coffee Cult was hungry, and we made it only as far as the East End branch, because, well, it’s closest. In the spirit of anthropology however, we did make pre-generalizations about the possible influence of Nude’s proximity to the vintage markets, quirky bric-a-bac shops, hipster pop-ups and graffitied alleys of Brick Lane, and prepared ourselves for knitted trilbies, ironic eyewear and goji berries.

Boy was our judgmental face red when the whole Nude Espresso experience felt instead like receiving a warm hug from a relative, set to a soundtrack of Dire Straits. A New Zealand relative albeit, as Nude is New Zealand owned, but a comforting and familiar embrace nonetheless.

There are touches of the East influence, in the arty wall decals of trees, and the prominent Twitter handle decorating the otherwise warm minimalist space.  So too does the espresso machine have a vintage tinge, although the artistically laid piles of generous muffins, brownies, banana bread and packed-full sandwiches lying next to it feel decidedly like home. 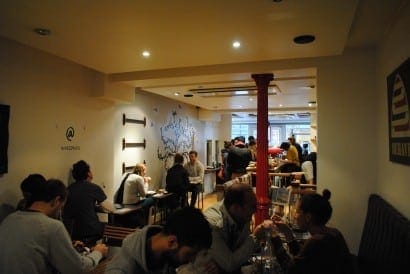 The big square table up the back, which stands out from the otherwise two-by-twos crowding the floor, is full on our visit with a recently reunited Antipodean family. The new London resident, keen to show his visitors his local (“look Ma and Pa — this is where I get my coffee, just like they make it at home”), sharing his stories over piled high plates of eggs and extras whilst planning where to go next to impress the folks. It’s a place of familiarity, of easing family into London life; or of casual lunches with friends and morning after breakfasts.

The coffee is excellent. Insisting on one size only, as coffee connoisseurs are want to do, requires me to order two, but they’re both artfully decorated and properly roasted.

The food is equally delicious, and all very reasonably priced.

Branching out from my usual poached eggs, I am rewarded with a piece of toasted brioche piled high with creamy scrambled eggs, and deliciously sautéed Portobello mushrooms.

I’m doubly rewarded when my friend says her poached eggs were a little on the vinegary side (of course, I gloat privately, with my head buried in my food), but the generous helping she received of halloumi, spinach, mushroom and tomato helps her smooth over that hiccup.

As we have admitted, Nude Espresso is New Zealand owned. Kiwi Richard Reed started with the East End cafe in 2008, with a focus on sourcing their own beans, roasting on-site and ensuring the baristas are properly and comprehensively trained, including in the fine art of rosetta design (previous readers would be aware of Coffee Cult’s appreciation of a delicately drawn coffee leaf).

Australia and Australians can legitimately claim no credit it for it whatsoever, besides the generous contributions we might make to the profits by regularly returning for another caffeine fix and truffled eggs.

If your family and friends are anything like ours, and try to lure you home with false claims of superior coffee Down Under, just take them to Nude Espresso next time they come to visit. Satisfyingly caffeinated, and with a full belly, it may well be you trying to get them to go home as planned, rather than the other way around.