Bill Granger's Granger & Co in London's Notting Hill has the easygoing glam of Eastern Sydney, set in the stylish grace of West London. Not just a breakfast, but an immersive experience in another world. 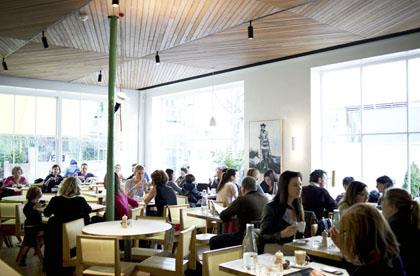 I first saw Bill Granger, Aussie celebrity chef and restaurateur, on his TV cooking show Bill’s Food. It painted a picture of a life full of pastel shades, throw rugs and streaming sunlight into an airy kitchen. Bill’s blonde ringleted spawn would be dressed in matching Osh Kosh Bigosh, adorably licking the batter remnants off the whisking spoons Bill had just used to casually whip up a banana butterscotch pudding.

His Sydney restaurants, Bills in Darlinghurst, Woollahra and Surry Hills, paint the same picture. Not just a café, but a lifestyle. A window into a Sydney world of affluent sun, long brunches after a morning swim before moving onto afternoons spent in designer boutiques.

Now, with Granger & Co in London, Granger brings his easy charm to Notting Hill. The sun may be gone but the affluence remains. Set amongst the white-washed, polished streets of Westbourne Grove, breakfast here offers the same window of opportunity — of access to a London I can’t afford, but at least can pretend to be part of for the length of a plate of scrambled eggs.

Like his TV show, the set is light and airy. Big pane windows, blonde-wood tables and rattan backed chairs, and a big marble bench occupying the right wall piled high with freshly baked muffins and cakes, pumping out fresh juices and coffees at record speed.

The first time I visit I’m early enough to avoid the famous queues and snag a table by the window, awkwardly pouring over the freely provided papers and sitting on one coffee waiting for a friend, whilst the building queue of glossed and sheened W2’ers eye me with ill-disguised hatred – coveting my table.

The second time, I graduate to the leather benches, surrounded by heavy-wool-knitted, iron-straight haired, Prada-bag-carrying ladies who lunch, discussing their weekends spent in some ‘shire’ somewhere, rambling around the English fields in Hunter wellies and sipping shiraz by the fire back at their country manor.

I covet their table.

A tip from a Sydneysider – there are really only three things you order off a Bill’s brunch menu: the sweetcorn fritters, roast tomato, spinach and bacon; the ricotta hotcakes, banana and honeycomb butter; or the very creamy scrambled eggs and sourdough toast. Everything else is just unnecessary eye candy. True for Sydney, and true for London.

The first time, it’s perfect. The corn fritters are crispy, corn stuffed and perfectly balanced with juicy roast tomatoes. The hotcakes are light, pillowy deliciousness, with the honeycomb butter giving that extra kick of sweetness that you might need after a long wait.

The second time, in true Groundhog Day style, I insist on the same. This time though, there’s just something not quite right. The hotcakes don’t have enough extras to soak up the doughy cakes, and the corncakes are undercooked and still have gooey batter in the middle. The illusion is shattered, just for an instant.

Oh well, at least the coffees are consistently delicious.

Having conquered the well-heeled Sydney breakfast set with his three restaurants, expanding into Japan with four more, he is now making his mark in London with the same approach that has proved so popular in Australia.

The website, with its breezy photos of Sydney harbour says it all. It is the easygoing glam of Eastern Sydney, set in the stylish grace of West London. Not just a breakfast, but an immersive experience in another world.