For any Australian in London, Flat White in Soho is an ageing icon still worth visiting — even if its trendy Aussie offspring dotted elsewhere in the city may just have outgrown this Antipodean matriarch. 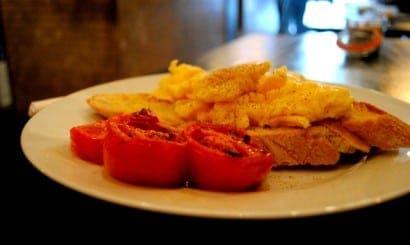 HAVING been a frequenter of a range of Antipodean coffee shops in London for a while now, Coffee Cult is aware of the significant influence of the Down Under cafe culture on a city which used to think a can of baked beans slopped on a plate next to a black pudding sausage was the height of culinary sophistication. Or, at least, we like to pretend to take credit for the revolution which has swept the London brunching world  – as we’ve witnessed fry-ups be replaced with poached eggs, corn fritters and tomato kasundi, and laminated no-spill menus give way to looping script chalked on recycled bricks.

Arguably the forerunner to this capital awakening, this collective discovery of the perfection of a carefully brewed textured coffee in a paper cup, is Flat White — the ‘original’ Australian coffee shop in London. First opening its doors in September 2005 it aimed ‘to bring the refined artisan style coffee prevalent in Australian and New Zealand cafes to London’. And so it did — quite effectively, if reviews and blogs are anything to go by. Now established as a well known Antipodean haunt, it is regularly cited in ‘top ten’ lists as the best coffee in London, and a great place to grab breakfast in Soho.

Therefore, visiting it for the first time this week, Coffee Cult felt somewhat like they were going on a pilgrimage to the faraway kingdom of Mordor. Attending a live Paul McCartney show after too many gigs by Beatles tribute bands. Or maybe most like finally casting eyes on the painting of Princess Catherine at the National Portrait Gallery after seeing it reproduced ad infinitum in the Daily Mail.

It would be an homage, a tribute. A recognition of the debt owed to this forerunner by all other Antipodean imitators that followed in its wake.

Why then, after all the hype, did we leave feeling underwhelmed? It felt a bit like Kate Moss to the other’s Cara Delevingne. Still good, but a little weathered and a bit off colour — as if it had smoked too many darts on the deck of a yacht in the French Riviera, resting on its laurels. 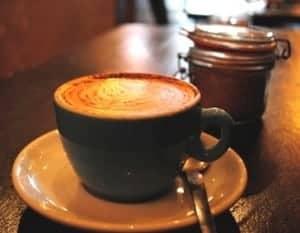 It pains us to say it, it really does. In fact it feels almost as un-Australian as not eating lamb — according to Sam Kekovich. But, the coffee at Flat White didn’t live up to expectations. Maybe they were too high, maybe we should have ordered the signature cup instead of a cappuccino, but it wasn’t to our taste.  Strong, yes. Creamy milk froth, yes. Bitter, well — slightly. However, for those who like their coffees in this style, it may well still be the best place in Soho to get a decent takeaway cup.

The food too was mildly disappointing, though my friend’s toasted banana bread did at least pass the apparent ‘moist’ test. I opted for the scrambled eggs with a side of roast tomato from the relatively simple offerings of porridge, croissants, pastries, eggs and sides. It was a generous portion, for what remain very reasonable prices, but the eggs are unfortunately slightly cold and not quite as creamy as they could have been.

Perhaps the lunch menu should have been the go — appealing sounding sandwiches such as chorizo, zamrano and piquillo, or a packed full salad.

Flat White is a cafe for those media types that stalk Soho’s structured streets during the day — loud, brash, rushy and definitely not awake at the opening hour of 8am. It is simple enough decor — a long bench seat with plain wooden tables all lined up in a row. Catering to the quick meal, takeaway coffee crowd. Coffee Cult does appreciate a good photograph however — and there is a lovely selection covering the wall. 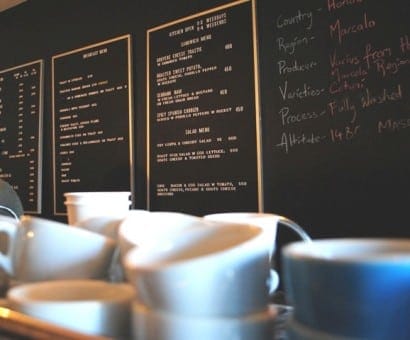 Like Alfred Hitchcock to Gus Van Sant’s Psycho, Flat White is arguably the original Antipodean cafe in London — and is therefore owed its due from thousands of crazy capital coffee hunters.  In addition to the Berwick Street Market cafe, the owners also opened a sister cafe, Milkbar, a few streets away. They run a 10-coffee-free promotion with credits for coffees available at both cafes.

It does the job. Pretty good coffee, pretty good food, served quickly and efficiently so you’re back on the streets yelling down your Bluetooth in no time. For any Australian in London, it is an ageing icon still worth visiting — even if its trendy Aussie offspring dotted elsewhere in the city may just have outgrown this Antipodean matriarch.