EDINBURGH EXPAT | If there is one thing we do too little of in contemporary daily life, it is convulsing our naked, crudely painted bodies around a giant burning sculpture to the sound of aggressively beaten drums. 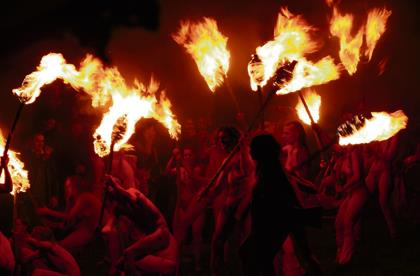 I’VE always said this. And sure, such an affinity might not have made me popular in high school. It might not have been the best way to welcome guests to my 16th birthday party, nor was it appropriate to perform for my family at our pet cat’s funeral, but who’s laughing maniacally now Mittens? Today I live in Edinburgh — where once a year people don cloaks, colour themselves red or green and erratically dance to celebrate the changing of the season. I ask again, who’s laughing now?

Head to Edinburgh’s Calton Hill anytime from nine to midnight and you will see semi-naked bodies writhing in the grass, people lighting fires – and once you’re done observing the youth culture- why not check out Beltane Fire Festival which offers something similar on the 30th of April each year.

Though inspired by the ancient Gaelic festival of Beltane, today’s event is considered more of a creative reimagining. It draws on a variety of mythological, literary and historical elements to make it something of an homage to the original. However, in millenniums gone it is unlikely spectators attended dragging behind them a Tesco shopping bag full of Carlsberg cans, and I’m almost certain that the neon-lit Fish & Chip stand was positioned on the other side of the bratwurst cart.

The spiritual significance of the event derives from its narrative which shifts as an anti-clockwise procession around Calton Hill. The procession is driven by two main characters, the May Queen and the Green Man, who make their way towards summer while meeting various symbolic groups along the way.

Spoiler alert: the relationship is tested by some colourful characters throughout the journey but in typical rom-com fashion they end up together in the end.

Unfortunately, the narrative is impossible to follow. Physically, I mean — conceptually it’s a piece of cake. This might have something to do with the 11,998 spectators that stand between you and the performance. All one can really hope to do is watch as the ominous glow in the distance moves from one location to the next and listen as each significant moment is signalled by a cheer from those lucky members of the audience pressed against the front barrier.

By telling one story, the Beltane Fire Festival seems to be living another- that age-old fable of the once small and quirky event that has become too popular. We all know it.