INTERVIEW | With a career spanning more than half a century, BARRY HUMPHRIES has been a godfather-like figure in the Australian entertainment scene, with his work leaving an undeniable impact on theatregoers, critics and fans the world over. KIEL EGGING sits down with the veteran entertainer to discover why some of his most famous characters - most notably the unforgettable DAME EDNA EVERAGE - will be making their final curtain call in London's West End this winter.

by Kiel Egging
in at, Lifestyle 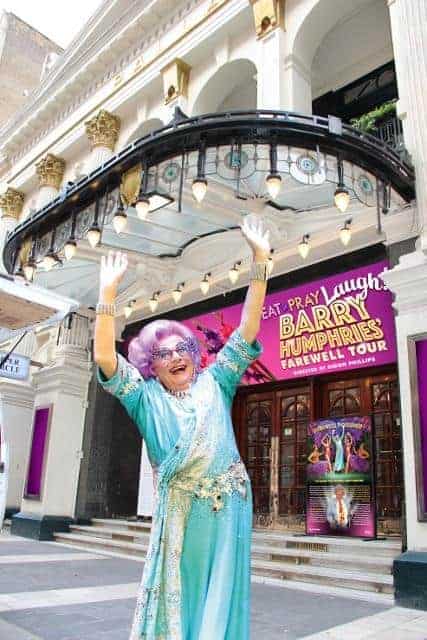 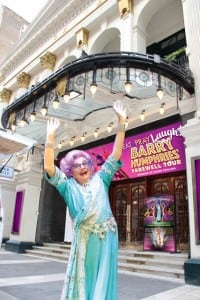 THIS is it. The Gladys are being pruned for the final time, the purple wig is ready, and those infamously glitzy glasses are getting a polish.

Arguably one of Australia’s biggest exports of a generation, Barry Humphries, is calling it a day.

And it’s here, in a Holburn office not far from the West End – an area where his raw talents have shone for decades – the legendary comedian tells me his upcoming farewell tour is exactly what it says on the tin.

There will be no ‘Farnsie’-like comeback for Dame Edna Everage, his Moonee Ponds housewife character who has become a cult hit around the globe – and the star of his new show Eat Pray Laugh!, which opens at London’s Palladium on 13 November.

Nor will there be future outings for his other characters Sandy Stone and cultural attache’ the Honorable Sir Les Patterson, who star in the first act of the show.

So, why is he pulling up stumps?  For a 79-year-old, Humphries is looking pretty shmick for his age – he’s here decked out in a crisp white shirt, grey suit pants and a beige hat with a pink ribbon around it.

He’s quick to quip he’s not retiring Edna and his other characters because he’s sick of shaving his legs (“I’ve never made huge concessions for feminity!”) and donning the eyeliner every night.  He also insists he may do other spots of work as an actor sometime in the future.

Instead, it’s a hate of hotels and an urge to do more painting and write some books which led to his decision.

“I haven’t had enough, it’s just the touring. It’s going from one city to another, going to hotels and things and not having any kind of settled base. And I’m sick of doing that.

“It’s not going to be a Johnny Farnham. This is it, and I hope all my Australian friends will come.

Humphries will arrive for his stint in London after dates in other UK centres including Edinburgh, Cardiff and Milton Keynes.

The city is one which he’s had an association with for more than half a century, having first arrived here in the 60’s, trying to get his big break. He wholeheartedly believes it was the best thing he did both personally and professionally.

“I was starting to have a bit of success with some tapes I made in Melbourne, I had invented a couple of characters, and I was getting a taste for it. And I thought now is the time to start anew, because otherwise I won’t have the courage to.”

He believes the changes which have taken place in the city, and the cultural development of the Australian expat scene over the years has been pretty dramatic.

“When I first came to London, I didn’t live in Earls Court…it was known as ‘Kanagaroo Valley’ back then.

“All the Australians lived in the one area, they would huddle together burning gumleaves and winge about the poms. They’d all go to Australia House to read the Australian newspapers and the Women’s Weekly, and some of them would never even meet an English person at all.

“And I thought, when I come here, I’ll never live at Earl’s Court. I’ll stay in London even if I’m unemployed, because if I start going to the provinces, I’ll never get out of them. My aim is to be in the West End of London so I’ll stay here until I have to.”

Humphries admits to going through “a lot of blood sweat and tears, right from the first show I did here”, trying to make his mark on the West End.

“Nobody had heard of me, and I was out of work for a long time. In the 60’s I was in musicals, the original Oliver…Spike Milligan…and I was in other people’s shows too and got to meet a lot of people doing so. 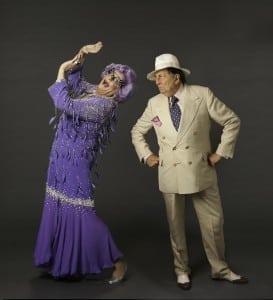 “People start dying when you get older, then all of a sudden from being unknown and struggling, people come up to me and tell me I’m a legend and an icon, and I’m thinking, ‘Don’t be ridiculous.’

Ever the salesman, Humphries insists Eat Pray Laugh! is his finest body of work, billing it as “a return to the West End after a 15 year absence” offering something genuinely different every evening.

For starters, “Les is doing a cooking demonstration on stage”, and Dame Edna Everage has apparently “got some Eastern philosophy to part with the audience.”

“I think it’s my strongest show, there’s lots of variety in it, and I’ve tried and tested it on that long Australian tour last year,” Humphries says.

“It will be a very complete sort of entertainment, a lot of dancing, singing, costumes and spectacular sets.

“There are some big issues discussed, people might come one night and it’ll be very different from the night before.”

Indeed, the star of the show is Dame Edna Everage, the Moonee Ponds housewife who has become a cult figure, adored by audiences all over the world.

And Humphries admits even in retirement, a part of Edna and her characteristics will always stay with him.

“I think I’ve always got a soft spot for old Edna, she’s inescapable,” he says.

“She means well, and I thought at first she’d only interest Australian audiences, but she seems to be liked even in an alien culture like New York.”

While he doesn’t exactly share the same thoughts or opinions as his alter ego, Humphries believes Edna’s development and impact over the years has been remarkable – listing the Tony Award for 2000’s The Royal Tour on Broadway as her finest moment.

“I don’t agree with a single thing Edna says, but she has a wonderful way of expressing things about life, she’s the alternative point of view,” he says.

“I think she’s changed totally, she’s now really powerful, and since Margaret Thatcher isn’t with us, Edna’s probably one of the most powerful women in the world.”

With Dame Edna calling it a day, I ask Humphries who he would like to pass her famous Gladys on to, to carry the hopes and dreams of Australian comedy and theatre. 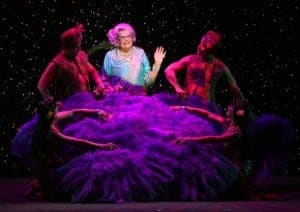 “I’m a big fan of people like Kath and Kim (Riley and Turner), those girls are brilliant. And I like Eddie Perfect…Shane Warne the Musical was brilliant. And then the other guy who did Summer Heights High, Chris Lilley…fantastic.

“I’d share them (the Gladys) with all of them. They are original, they see the world freshly with their own humour, and they’re world class performers. I hope they can spread the success.”

Humphries admits it’s “extroadinary” that he’s been able to carve out a career beyond half a century. He cheekily suggests those who want to do the same don’t play too much sport.

“The main thing is I don’t play sport…athletic activity is the No.1 killer, all the people I knew at school who were good at sport are dead!”

I suggest to him that entertainment is the spice of life, and he agrees.

“It’s healthy exercise, people are using laughter in a world which is increasingly worrying.

“This is the no.1 job… you have a job of communicating entertainment and enjoyment, it’s perfect.”

After the London stint – which will run until January next year – Humphries will take Eat Pray Laugh! to a few more UK cities before heading for a season in New York. There’s also a possibility of one last farewell concert in Australia.

If so, Dame Edna’s hometown of Melbourne appears to have a good chance of getting another glimpse of the comedian – as it is a city which Humphries admits is always a part of him and has been so influential to his material.

“The world I describe is Melbourne, everything I do is really about Melbourne,” he said.

“I think if you can describe a small world in great detail, everyone else will believe in it. You might have Moonee Ponds in Melbourne, we’ve got Wembley here.

“And you know, Melbourne is in the blood, no matter where you go, whether you like it or not, that’s where we come from.”