The best places for food in New York

by Chris Arkadieff
in Travel

THE city that never sleeps didn’t fail to deliver on both food and dining. New York once had a reputation for fast food; oversized meals and an over played tipping culture. But after my second visit within 12 months, I am a little frightened at the speed with which this city is making its way to the top of the culinary world…

While in town, I spent two days working at the Gramercy Tavern, where I was shown how they prepare all their cured meats in house, to methods that would torment a scientist. The highest quality pork and rare bread meats are sourced and undergo a pickling or smoking process to make tasty prosciutto’s and terrines.

The seafood is world class there and the highlight was the baby scallops that were so sweet some didn’t even make it onto the plate. Oysters from up Boston way were perfectly formed and so ocean fresh I couldn’t pass up a second.

My next NYC hidden gem to reveal is a place secreted behind a thick curtain in the Le Parker Meridien Hotel. Tucked away and definitely worth finding is The Burger Joint, a place that has become an instant hit with Manhattan foodies and the ‘in’ crowd. Ask for directions from the concierge and you will be shown into a room that would look more at home in Shoreditch than a swank hotel in Manhattan. Resembling a small café, the tasty ground beef burgers and fries are first class and the vibe is spot on. Queues can sometimes stretch out the door but this burger joint is well worth the wait. 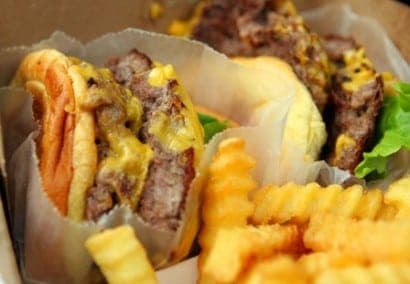 Blooms Deli on Lexington Avenue was my breakfast destination before work each day and it gives you the full American service. Three eggs (not two!) with smoky bacon and sausages that were to die for. The service was superb with coffee hitting the table straight away and the food not long after.

As we all know, Aussies lead the way when it comes to breakfast so it was refreshing to find Ruby’s in Soho which is owned and operated by two friendly Aussies. As soon as I opened the door I was greeted by a ‘hello mate’ and that instant Aussie café feel where you know they will serve our famous ‘flat white’ cuppa.  Vegemite on toast is available and Weet-Bix are also on hand for any home sick Aussies.

Immediately after breakfast we hit one of my favourite shops in the world, Saturdays on Crosby Street, for another great coffee and a chill out session in the back garden. Saturdays is a surf shop/clothes shop/café with one of the best cultural scenes in Soho and ambience to die for. Surf documentaries are played on the shop wall alongside works of art and antique boards. A photo shoot by the resident photographer was happening while we were taking in the scene and in between New York rain showers he was snapping shots of the latest long board to hit the shop for the next summer season. 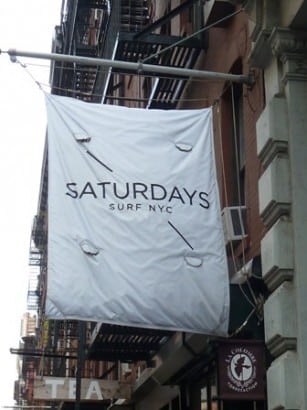 However despite my love for all the places above, my all time favourite find of the trip was Red Rooster in Harlem. It has to take first prize for their great food, service and atmosphere. When my friend suggested Red Rooster, immediately images of the old quarter chicken and chips from back home were flashing through my mind. But Red Rooster in Harlem is nothing like the Aussie fast-food franchise and is the hottest thing around. Booking a table at night can be a three month process and lunch can be just as challenging. Red Rooster had been an institution for many years in Harlem serving traditional southern dishes of fried chicken and their famed corned bread until Marcus Samuelsson revised the original site and added his own twist to the menu but still keeping the traditional dishes.

We started with the corn bread with a sweet tomato and raisin chutney and hand whipped butter. Tasty and perfectly baked we could not wait for our main courses. Southern style fried chickens served with homemade romesco style sauce, I asked for the recipe and my request was politely declined.  My chicken was lightly fried, crisp and succulent. Simple and perfect in everyway. 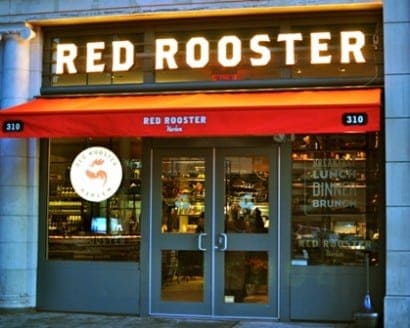 My friend chose the catfish. Now coming from Oz, I would never dream of ordering such a fish but this dish was outstanding. Perfectly cooked, the fillet of catfish was baked with southern spices while resting on black-eyed peas and collar greens (thick leaf spinach which is the hottest ingredient on menus right now). The fish was sweet and tasty and jammed packed with flavour. Desserts were just as tasty and the wine list has bottles for every budget. This restaurant is buzzing and jammed pack with customers from Downtown to the upper eastside.  Harlem is an up and coming area and a place to watch. Get there before it is never the same again!

Another place to watch is Williamsburg in Brooklyn; this suburb was once an area one would not venture into but has now become a place to be. Bedford Avenue is amazing with café’s, street markets and pizza restaurants popping up everywhere. It’s cool, n ‘in’ and worth checking out. On Sundays during summer the flea and food markets offer great food and real coffee with an amazing backdrop of Manhattan to take in while relaxing the arvo away.

Chris’s list of favourite foodie places to check out in NYC: