For a culture-filled weekend getaway from London, look no further than Lisbon. LEE CROSSLEY found out that it’s easy — in every way.

by Lee Crossley
in Travel 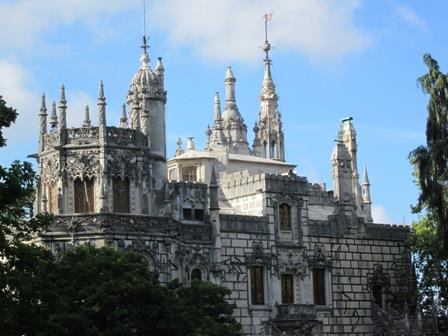 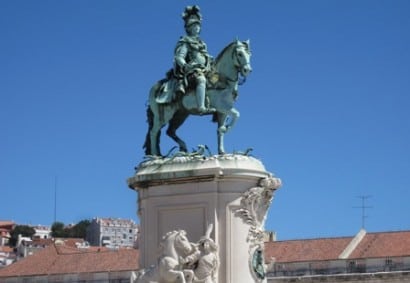 WHEN I reflect on my recent trip to Lisbon, I still can’t believe how hassle-free it all was. We’ve all had holidays where things don’t go to plan. But the harder I think about our time in Lisbon, the more I conclude that it was close to the perfect holiday. Which made me wonder: what ingredients make up the perfect holiday? For a trip to go smoothly, here’s what I need:

Transport: easy to get around once you get there.

Food: delicious food and an array of choices.

Culture: different enough to be interesting, same enough not to be alienating.

Portugal’s capital Lisbon ticked all the above boxes, making it the ideal destination for a weekend getaway from London.

Easy to get there

The London to Lisbon flight lasts about two hours. And you can pick up a deal on return flights for less than £100!

Easy to get around

Lisbon airport is right on the edge of the city and well served by buses and taxis (which are cheap, see below).

We caught an airport shuttle to our accommodation that cost â‚¬3.50 each. The journey took about 15 minutes. Easy!

Once in Lisbon, most sights (on flat ground) can be accessed on foot. I emphasise on ‘flat ground’ because Lisbon is renowned for its steep hills. (But some challenging terrain shouldn’t bother you, rather give you the chance to burn off the excess carbs you’ve accumulated from custard tarts, local wine and other delights). For everyone else, there is no better way to see the streets than to snake your way through the quaint backstreets on one of Lisbon’s iconic vintage trams.

Being a Melburnian, riding the rickety No.28 tram from Rossio Square to the top of the hill and back again took me back to the days I first caught the City Circle around Melbourne’s CBD. Lisbon’s trams are almost identical to the old, vintage trams being phased out in Melbourne now: leather seats, wooden floor, steel structure. There is one distinct difference, however. Rather than the driver being shut away from the passengers in their own little section, in Lisbon, they are positioned at the front with passengers squashed in around them.  Their friendliness and casual approach means tourists and locals can engage in banter as the streets pass. Open windows allow the breeze to blow in the scent of delicious offerings from nearby cafes and restaurants. One word of warning: thieves have been known to target starry-eyed tourists on the main routes so keep your bags on a tight leash.

If you’re in a rush then it’s hard to beat Lisbon’s cabs. Drivers are friendly and fares are cheap. We caught one from the docks by the river to our accommodation in Rossio Square, a journey that would cost over $20 in Melbourne and it was like the meter was stuck, going up 5c at a time! We gave the driver â‚¬10 when we reached our destination, which still meant he got a healthy tip.

Lisbon also has a good Metro system as well as a long-distance train network, good for day trips (see below).

Lisbon is one of the EU’s least expensive capitals, making it a great place to visit for the cash-strapped Aussie.

But this hasn’t always been the case.

Once upon a time it was one of Europe’s economic powerhouses, controlling a maritime empire that stretched from Brazil to Macau.

Several iconic buildings — the Torre de Belem, Mosteiro dos Jeronimos and the imposing Moorish Castle — survive from these times, though many other buildings were brought down by the great earthquake of 1755.

Bananas, a bag of croissants, drinking yoghurt, juice and bottled water came to less than â‚¬2 at the supermarket. It was at that point I knew we’d come to a good city! Dinner for two at a nice restaurant (three courses and wine) never exceeded â‚¬40. Head of the tourist to eat like the locals around the Alfama district. We did and ate three courses for â‚¬8 a head!

Or, if you’re staying at a hostel, some have home cooked meals at a very reasonable price.

We dropped in to Living Lounge Hostel, where a friend of ours — an Aussie expat named Henri — works, and got a delicious three course meal, wine and great conversations with interesting travelers for just â‚¬8.

Unfortunately, when things are cheap, it often means the locals are struggling. The Portuguese economy is expected to shrink 2.2 per cent this year due to the tough austerity measures it has had to take as part of its 78 billion euros ($106.06 billion) debt rescue agreed earlier this year with the European Union and International Monetary Fund. Unemployment is already sky high, at 12.5 per cent.

“If people seem unhappy it’s because we live in uncertain times,” said the host at our accommodation.

“A lot of people don’t have jobs and they have families to feed.”

Easy to enjoy the climate, culture and cuisine

The fact is Portugal has never been famous for its diversity of food.

The usual stereotypes of grilled chicken, seafood and mixed grill can be found on most Portuguese menus. Italian restaurants are well represented, as well as the odd Asian eatery.

The bottom line is you’re never far from a restaurant in Lisbon. We frequented a number of areas, sampling various different cuisines.

Bom Jardim, on Rei dos Frangos (the street name) in the Baixa region, boasts the best barbecue-grilled chicken in town. We stumbled there, hangover in tow, by accident and weren’t disappointed.

Some innovative Portuguese chefs are keen to break the mould, going beyond the grilled chicken and seafood stereotype to give visitors a tasty surprise. My advice would be to go off the beaten path and see what you can find. There are so many nooks and crannies in Lisbon and at the end of most of them is often a quaint little café or restaurant. 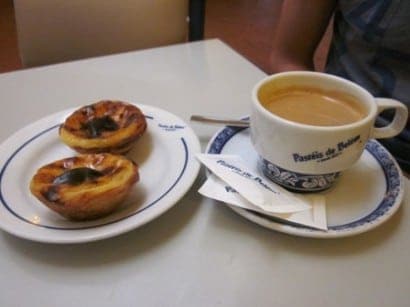 Best of all, many have musicians playing Fado, traditional Portuguese music with a melancholy feel, for free, adding to the atmosphere.

The weather in Lisbon is pleasant most of the year. It seldom drops below 20C. April-October are the warmer months but it generally has the reputation as being one of Europe’s sunniest capitals.

This adds to the city’s buzzing vibe with pavements overflowing with pedestrians from dawn to dusk. After dark, things generally don’t get busy until after midnight and even then there is an air of anticipation that bigger things are to come.

We were told Lux, part-owned by actor John Malkovich, is the best club in town but we never got there. The Bairo Alto region boasts a couple of lane-ways were bars stretch for about 200m and you can drink and dance the night away. We started there and kicked onto Op Art, an open-air venue by the water (down by the docks) that took us into the morning. Was a bit pricey (â‚¬15 cover charge) but it delivered.

Many locals start their evenings (and day in some cases) at A Ginginha, a tiny bar serving just ginginha (cherry brandy). They know what they’re doing — they’ve been doing it since 1840. And it appears the prices have only changed marginally since then. Two ginginhas for â‚¬2.80!

Lisbon is packed with interesting and quirky sights. The 25 de Abril Bridge (25th of April Bridge), a 2km suspension bridge that connects Lisbon to Almada over the Tejo River, is hard to miss. Because of its red tinge and appearance, it is often likened to the Golden Gate Bridge. Beside it stands the Sanctuary of Christ the King monument. This giant Jesus statue was inspired by the Christ the Redeemer statue in Rio, Brazil and was erected in 1959 when Portugal was under the authoritarian rule of Antonio de Oliveira Salaza, who ordered it to be built.

There are too many great sights in Lisbon itself to list here, but the highlights include the Torre de Belem, Castelo de Sao Jorge and the backstreets of Alfama. For people watching, park yourself on a bench in Rossio Square. Beware though, you’re likely to be offered drugs by one of the many ‘fake dealers’ that have found their way to Lisbon in recent years. “What they’re selling is not real drugs,” a local told me. “It’s a concoction of things they’ve put together to fool tourists and they can’t be caught by the police because they’re not selling real drugs. They’re a pain in the butt to our tourism.” 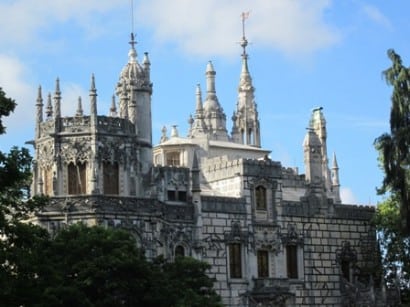 For some of the most extraordinary sights you’ll ever see (no exaggeration), though, take the 40 minute train ride to Sintra.

A hilltop town, it was the former residence of Portuguese royalty and has been a UNESCO World Heritage Site since 1995. Within close proximity to one another lies: Palacio Da Pena, Castelo Dos Mouros and Quinta Da Regaleira. I know those names will mean little if you haven’t been there. But take my word and see them for yourself. You won’t be disappointed. They have left a lasting impact on me long after leaving.

Another day trip worth taking is to Cascais where sandy beaches can be found. That’s right, sandy beaches! We take them for granted back home but they’re a rare quantity over here. Take a day out of your schedule and catch some rays on one of the three decent beaches there. Don’t expect warm water — it’s the Atlantic Ocean, not the Med Sea — but it matters little when you’ve got sand underneath you!

Easy to get comfortable and immersed in Lisbon life

When choosing accommodation, think wisely about the kind of experience you’re after.

If it’s privacy and convenience, it’s hard to beat an apartment. We booked ours through an outstanding company called Traveling to Lisbon (www.travelingtolisbon.com), which has a range of apartments to suit a range of needs: from parties of 10 to couples. And all are in great locations and at a reasonable price. Our apartment had everything we needed: fridge, washing machine oven, kettle, TV, en-suite and a view to die for overlooking Rossio Square. It was like a home away from home.

If it’s a more social experience you’re after then Lisbon has more quality hostels than most cities. The Living Lounge Hostel was recently voted the No.1 Hostel in the World by hostelworld.com. After spending some time there, I could see why. Henri , an Aussie ex-pat, quit his job as a journalist in Melbourne to lead tours and help contribute to the general vibe there earlier this year. There’s something going on each night there and a real buzz that you can’t get in an apartment or a hotel. We joined Henri’s pub crawl on Saturday night. Without it, we wouldn’t have found one of the coolest little stretches of bars in the Bairro Alto region and met some amazing people (it felt like a Melbourne laneway on steroids). At the hostel, you quickly get swept up into the community there. Plus, the facilities there are first-class, unlike any hostel I’ve seen.

If there’s one Portuguese word to sum up Lisbon, it has to be fÃ¡cil. Of course, you know what that means!? Easy!