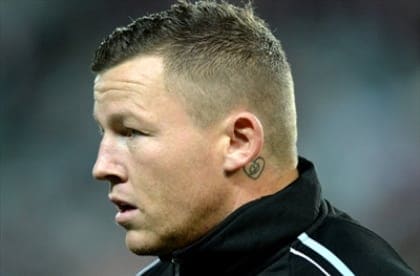 UK Super League clubs Hull and Warrington have ruled out making a move to sign Todd Carney following his sacking by Cronulla.

Carney’s immediate future in the NRL looks in grave doubt after the Sharks became the third club to dismiss the 28-year-old following the publication of lewd photographs of the wayward playmaker on social media on Sunday.

A move to the UK appeared to be his best short-term option of staying in rugby league given NRL clubs cannot recruit players for 2014 after June 30.

But with Huddersfield failing in their attempts to sign him after his sacking from Canberra in 2009 due to visa problems stemming from a criminal conviction, clubs are understood to be reluctant to take on government red tape.

Warrington boss Tony Smith – the brother of Carney’s former mentor at the Sydney Roosters Brian Smith – said he had no interest in signing him.

“We’re very happy with where we are with our halves,” Smith told AAP.

“If he gets a visa over then I am sure he will get a club, but we won’t be making a move.”

Hull FC football manager Motu Tony said he was an admirer of Carney and although the club are in the market for a playmaker, it’s unlikely they will make a move for the 2010 Dally M Medallist.

“It’s a shame for the lad with what’s happened as I watched him on Friday against Brisbane and he went pretty well,” Tony told AAP.

“I can’t really say that we want to sign him because we are already too far down the line with a couple of other players.

“But he would certainly be a good signing for someone, but I doubt that would be us.”

Outspoken Salford owner Dr Marwan Koukash, who made no secret about his desire to sign Benji Marshall after his departure from Super Rugby, has already ruled out making an approach.

In 2011, Carney had discussions with French club Catalan Dragons – who were then coached by Sydney Roosters mentor Trent Robinson – but he opted for a move to Cronulla.

But a move to the French club is unlikely after Scott Dureau was offloaded to the Roosters on Monday to make way for Carney’s former Canberra teammate Sam Williams.

Carney expressed his remorse in an interview with the Nine Network on Monday but said he felt betrayed by Sharks CEO Steve Noyce, who also sacked him from the Roosters in 2011.

“He (Noyce) asked me what I thought should happen,” Carney said.

“I just said I wanted the opportunity to talk to the players then talk to the board and the staff.

“He said he’d let me know, then 10 minutes later the boys got in touch to let me know it had happened.

“I felt betrayed and lied to.

“If he wasn’t my previous CEO at the Roosters then I don’t think I would have been sacked.

“I just hope this is not the end of me as a footballer.”

The former NSW representative playmaker, who has reportedly received offers from French rugby, said he was shattered when he learned the picture had been posted late on Saturday night and had no idea it existed.

“It’s something I didn’t know was out there and would surface like this,” he said.