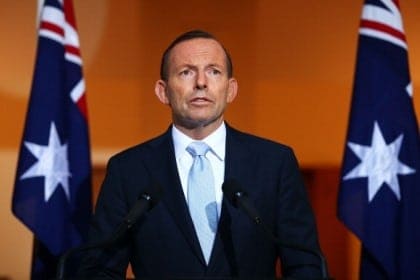 Both the Australian and British Home Offices have been offering vague responses to a Queensland blogger’s probe into Australian Prime Minister Tony Abbott’s citizenship.

The problem is that if British-born Tony Abbott has not renounced his British citizenship he might not have been eligible to stand for Australian office.

According to Ninemsn, the blogger known as Tony Magrathea has submitted freedom of information requests to both the Office of the Prime Minister and the British Home Office. He asked to see a copy of a RN certificate that the PM would have completed to renounce his original British citizenship.

Mr Abbott was born in the United Kingdom in 1957 to an Australian mother and British father. At the age of three he emigrated to Australia with his family.

According to Magrathea’s website, both requests have been refused.

The Australian Constitution is clear that any person holding dual citizenship would not be eligible for election to take office in the Australian Federal Government.

“It is very clear, according to the Commonwealth Electoral Act of 1918, that to stand for election a person must be an Australian citizen,” Professor Augusto Zimmerman of Murdoch University told Ninemsn.

“But Section 44 of the Constitution is very clear that for a person to stand for election, they must not hold the citizenship of any foreign power. So if a person has dual citizenship, and they have not renounced the former one, they are ineligible.
“It’s absolutely unequivocal,” he said.

The Prime Minister’s office replied: “The prime minister is an Australian citizen and does not hold citizenship of any other country.”

Ninemsn reported that 3,000 people have signed a Change.org petition demanding confirmation of Abbott’s renunciation of his British citizenship.

In 1996 Jackie Kelly was disqualified from parliament when, according to the stipulations of section 44 of the Constitution, Kelly was not eligible for office while she held both a Australian and New Zealand citizenships.