The strange case of the Italian restaurant and the flying pig

Could it be a plea for more pork on the menu? Did a short-sighted tradie put it on the wrong roof? An Adelaide restaurateur is puzzled. 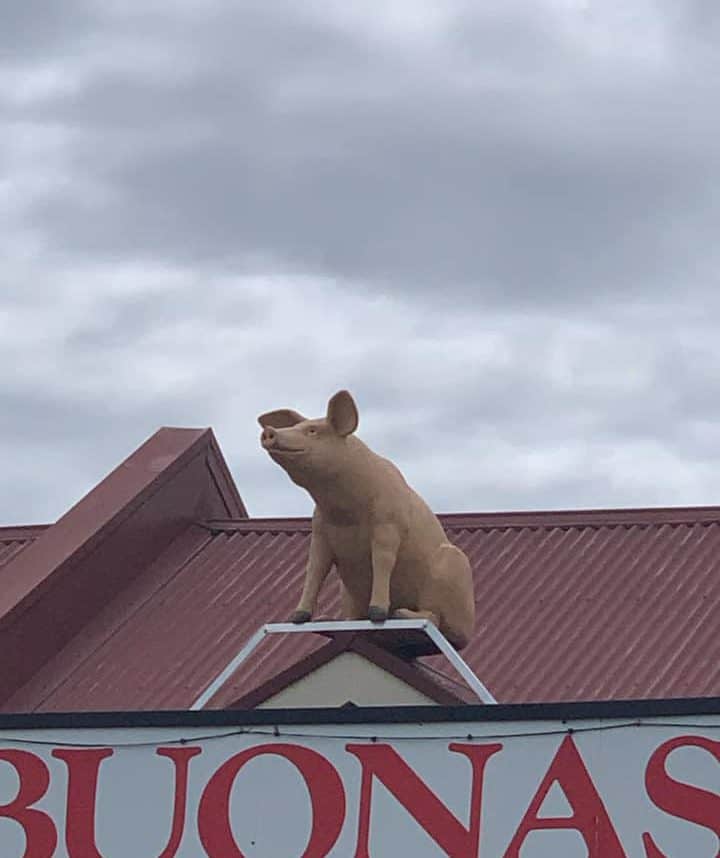 We’ve all heard that ‘pigs might fly’ and we know of the famous fairy tale where the wolf implores the three little pigs to ‘let him come in’. And we’ve probably also been told of restaurants ‘going to the dogs’ – although probably not to the pigs.

Whatever the pig-related joke or wisecrack, Adelaide restaurant owner Ilario Nesci has now undoubtedly heard them all.

Looked up to see a pig staring back at him

Ilario and his popular Buonasera Restaurant on Glen Osmond Rd in the suburb of Glenunga have become something of a local sensation after he posted a photo on the eatery’s Facebook page of a fibreglass pig mounted on the roof.

Apparently on Tuesday morning he went for a walk before opening for business this week, happened to look up … and there was a pair of piggy eyes looking straight back at him!

That’s a little odd in itself. But what’s even more surprising is that no one from the restaurant put it there. “They say that pigs don’t fly. Would you believe it, [I] found this on my roof top today. Anyone know what is going on?” a bemused Ilario asked his social media followers.

Perhaps a short-sighted tradie is responsible?

He believes the dastardly pig plotters must have put it there sometime between Sunday night and early Tuesday morning.

The strange tale of the rooftop pig was soon picked up by local media. Once caller to a radio station suggested that, given that the same centre also houses a butchery and an optometrist, perhaps the piggy should have been placed above the butchery. But the tradies involved were clearly in need of an optometrist and put it in the wrong place?

Another person who contacted the media pointed out that the Buonasera pig looks very similar to the four bronze pig sculptures in Rundle Mall in the Adelaide CBD. Perhaps the litter has grown and spread their wings to the suburbs?

The rooftop piggy is welcome to stay for a while

Whatever the truth, Ilario is happy for the pig to stay for a while. It attracts a bit of extra attention to the 50-year old restaurant and he points out that it’s going to cost him money to have it removed.

Could it be that there will be more pork dishes on the Buonasera menu in future?