The global plandemic? There wasn’t one 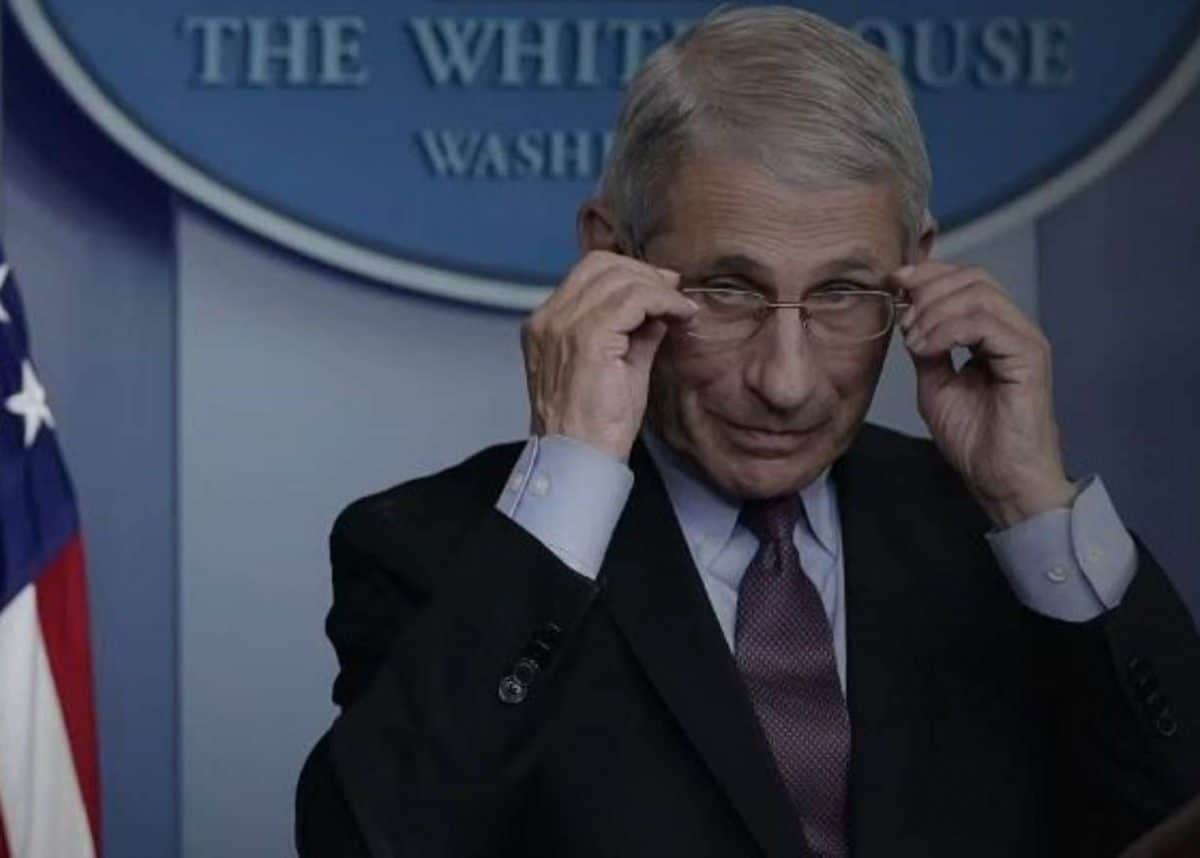 Dr Anthony Fauci had been warning us of a pandemic for almost 20 years. There is no plandemic. (Screenshot via YouTube)

Wanna know about the global “plandemic”? There wasn’t one! “Dr America” Anthony Fauci, a key member of the White House Coronavirus Task Force, didn’t just warn President Donald Trump about a possible disease outbreak as recently as 2017, as reported by Business Insider.

In fact, Dr Fauci warned of an infectious disease outbreak as far back as 2001.

What did Trump do about Fauci’s 2017 warning? Why, the next year he put the kibosh on the National Security Council’s pandemic response team, of course.

WHO NEEDS A PANDEMIC RESPONSE TEAM WHEN SON-IN-LAW IS JARED KUSHNER?

Who needs a pandemic response team when your son-in-law is Jared Kushner?

Had Trump deployed at least some of the playbook’s timely advice, thousands of the 100,000-plus American lives now lost (at the time of writing) through the Administration’s and the President’s personal incompetence – and his continued spreading of dangerous and false information – may well have been saved.

Oh! And don’t forget that President Barack Obama’s outgoing administration briefed Trump Inc’s incoming maladministration team, also outlining various scenarios and appropriate responses — no doubt having to explain in bubba language to those in the nepotistic innermost circle of dopey sycophants, where one’s DNA is the only curriculum vitae required and overrides even the need for a legitimate security clearance to work in Trump’s white White House.

The world’s political leadership – these days powered mostly by posturing psychopathic ironmen seemingly more intent on flashing their balls at each other to see whose sacs hold the most testosterone – have failed us ordinary peoples of the world in preparing for the inevitable pandemic.

The best-worst U.S. ironman starter kit comes in the form of President Trump, whose burgeoning psychopathy has never been more apparent than in his incoherent and monumental leadership fail in relation to the public murdering of George Floyd; yet another victim of police killing black Americans.

There are so many more on this Roll of Dishonour. But I am gagging on testosterone, already.

These dystopian thuggee-type leaders who dominate our diseased world are living their wet dream and our Mad Max nightmare. They are architects of chaos. They are obsessed with power for power’s sake alone. They are united in their narcissistic collective id, brothers and sisters in arms. We know of their acts of war, but please show me their acts of peace.

To a varying degree, their cruelty and lack of empathy, even towards their own at times, are reflected in brutal, autocratic authoritarian governance; toxic fear-mongering techniques and perennial demonising of the “other”. There is also the poisonous veneration of gods not of our time, not fit for purpose, not fit for any time.

In this bubbling cauldron of hate boil toxic ingredients of animus brew, recipes inciting frenzy and irreligious histrionic fervour, set amidst the rhythmic beatings of nationalistic tom-toms, racist taunts and warped manifestos that defy even Mephistopheles on a good Opus Dei.

We must not let the miasma of coronavirus cloud the diagnoses of the world’s political MRI, before the onset of pandemonium. It was – and remains – of dismal calibre, to say the least.

Flouting of international law, human rights and covenants are now endemic characteristics, stitched onto the fraying quilts of long desecrated flags and constitutions. Even in our Great Southern Land, surveillance of civil society is now commonplace.

For decades – nay centuries – we homo sapiens have lived through outbreaks, epidemics and pandemics, and died of viruses, outbreaks, bio-chemical warfare and terrorism. Ditto all forms of other living creatures, great and small, plant life, atop and within the bowels of the Earth.

Thus we have been led to believe that, despite everything, our leaders, party machines, the thousands of intelligence agencies, international alliances and institutions, counter-terrorist agencies, scientists, analysts, domestic and external rapid response groups were all geared up for a rapid tactical response anytime, anywhere — at least in a whitish first-world type of country.

Tragically, we now realise nothing could have been further from the truth. And yet, we cannot say we were not warned.

On 1 March 2001, Dr Fauci’s mightily prescient paper for the Infectious Diseases Society of America’s journal, ‘Infectious Diseases: Considerations for the 21st Century’ was published on the Oxford Academic website.

Dr Fauci, longtime director of the National Institute of Allergy and Infectious Diseases, has much endeared himself of late throughout the world because of his steadfast refusal to acquiesce and endorse the dangerous quackery of President Agent Orange (courtesy Rod Quantock).

Internationally respected, he has served the world – and his nation – under six presidents, from Ronald Reagan to Donald Trump. In 2008, President George Dubya Bush awarded him the Presidential Medal of Freedom, but today he’s one of the few people on board the sinking USS Trump, who is prepared to publicly contradict the President.

Dr Fauci’s warning two decades ago was categoric and concise.

His introduction in the Abstract said it all:

And how about this?

‘At the dawn of the 21st Century, the future of infectious diseases and its impact on societies throughout the world is strikingly apparent.’

Fauci has impeccable professional credentials and has been at the forefront of responses to other infectious diseases epidemics and public campaigns both in America and worldwide, and continues to be lauded for his work relating to the HIV/AIDS pandemic.

He is internationally respected, not only because of his experience and decisive action (when not impeded by Trump) but also because of his skills as a communicator. He has that welcome ability to translate science, academe and statistics into understandable and frank language without talking down to us — in much the same way as Sir David Attenborough and our own Robyn Williams of the ABC science show Ockham’s Razor.

Spin and politics are symbiotic parasites. They are a virus and a pandemic unto themselves, and we – the peoples of the world – are witnessing it big time in our own backyards when it comes to the “C” virus.

In Dr Fauci’s paper, he eerily predicts a COVID-19 not merely being a possibility but a certainty:

The appearance of bird-to-human transmission of H5N1 influenza A virus in Hong Kong in the winter of 1997-1998 was a cogent reminder of the ever-present threat of a new strain of influenza A virus entering a population that is relatively naïve for the microbe in question. Most public heath experts agree that it is only a matter of time before another catastrophic influenza epidemic occurs and it certainly will occur in the 21st Century.

Writing about the disparities between developed and developing nations and the impact upon the latter, Dr Fauci writes:

‘In a different era, this would have been seen as an insurmountable problem, or at least someone else’s problem. Today, however, global health problems, particularly those related to infectious diseases, are beginning to be perceived by political leaders in the United States and in other nations as a threat to destabilise the world.’

Writing on global health and foreign policy, Dr America is no isolationist:

It is noteworthy that the area of science that contributed most obviously to foreign policy in the 20th Century was the physical sciences related to nuclear weapons, the Cold War and the race for space exploration. It appears that the growing forces of globalisation, together with the fact that the health of nations is critical for economic and political stability, will lead to an increasing appreciation in the 21st Century of the role of biological sciences and global health, particularly with regard to infectious diseases, in the development and execution of foreign policy.

A renowned humanitarian who has spent a lifetime trying to ameliorate the impact of infectious diseases in the States as well as elsewhere, particularly Africa, Fauci concludes:

Who can forget Anthony Fauci – Dr Planet Earth, no less – and Dad to three daughters, reassuring darling little seven-year-old Ava Allen on actor Will Smith’s show, that the Tooth Fairy categorically would not contract the coronavirus when she found Ava’s tooth under the pillow?

Tell you what, folks. I would rather listen to a man who believes in the Tooth Fairy than one who believes that swigging bleach is a cure for the coronavirus.