A STOLEN koala held by Prince Charles during the royals six-week Diamond Jubilee tour of Australia in 2012 has been returned to its home. 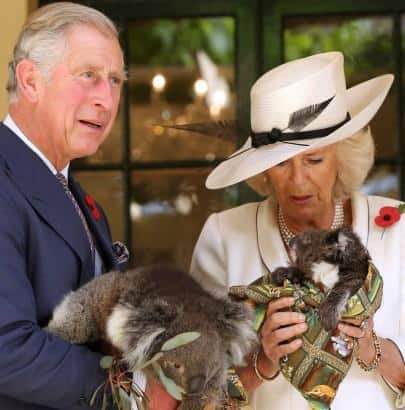 IN 2012 Prince Charles and the Duchess of Cornwall visited Adelaide on their Diamond Jubilee royal tour of Australia.

They sipped wine in the vineyards of Penfolds, tasted South Australian cheese and posed for the obligatory photo with Australian wildlife — a koala named Kao.

This week the four-year-old female was stolen from a locked cage on a private property, only to returned by the thieves a few days later.

Kao was stolen from a suburban Trott Park property between 7pm (AEST) on Tuesday and 9am on Wednesday.

Fauna Rescue SA rescuer Rae Campbell appealed for her to be returned, saying she would not survive without constant medical treatment.

The koala had been raised by Ms Campbell after being hit by a car which killed her mother.

Last year in November 2012 the Australian marsupial was taken to Government House in Adelaide to meet Prince Charles and the Duchess of Cornwall and take part in a photo opportunity.

Offered the chance to hold one of two koalas, Kao and a smaller one named Matilda, the Duchess chose Matilda, telling Prince Charles: “You take the big one, darling.”

The Prince struggled to hold on to Kao as she wriggled around in his arms, choosing not to look at him.

“I can’t see this one at all, he’s looking down all the time,” the Prince commented at the time.

Ms Campbell told the thieves she would leave the cage open at her property in order to facilitate Kao’s safe return.

On Thursday Ms Campbell called police after hearing a noise in the backyard and finding Kao.

The koala had a graze on one of her paws but appeared otherwise unharmed.