Sting in the Bali Nine tale for the heavy metal president?

Could Sting and an assortment of other musicians and bands like Napalm Death persuade rock music fan President Joko Widodo to spare the lives of Bali Nine pair, Andrew Chan and Myuran Sukumaran?

The Indonesian President is into rock and heavy metal. Big time. Last year, on July 9, the very day of Indonesia’s national election, Sting gave ‘Jokowi’ his rock royalty imprimatur, sending Indonesians a message urging them to use‘your rights’ reminding them that ‘every vote counts. #Jokowi9Juli’

Jokowi was chuffed. In between his habitual meet and greets with the people, he tweeted a ‘back at ya’ salute to Sting and other muso supporters:

Joko Widodo: Sting, Jason Mraz,Bumblefoot, and Arkarna thank you for your kind support.

Jokowi was duly elected the seventh president of the 250 million plus nation, receiving 53.13 percent of the vote and was inaugurated three months later on October 20.

President Widodo now holds mighty sway over the tenuous lives of the convicted Bali Nine ringleaders, Andrew Chan and Myuran Sukumaran, who are designated for an as yet unscheduled appointment with the firing squad. There is no stable delineation between the separation of powers in Indonesia, just as at times there are none in Australia.

As luck would have it, right now Sting is touring Australia with Paul Simon, performing this weekend at South Perth’s Sir James Mitchell Park, as part of the fabulous A Day on the Green series of festivals around Australia, where attendences invariably exceed those of certain cricket matches.

For Sting and Simon, this gig is part of their international ‘On Stage Together’ tour that started in February last year in Houston and ends this August in Trondheim.

Both artists are renowned for their humanitarian work.

Sting supports a number of charities, including Amnesty International, UNICEF and other causes, including the Rainforest Foundation he started in 1989 with his wife Trudie Styler.

The RF now operates on three continents. The organisation’s divisions survived some wobbly times, but now has had its efficiency levels restored by monitor organisations.

Paul Simon, who also supports the Rainforest Foundation, was the first U.S. performer to get onstage in post apartheid South Africa.

Simon’s portfolio of charities includes The Fund for Detained and Imprisoned Children in South Africa, Autism Speaks and the The Children’s Health Fund he co-founded with Dr Irwin Redlener that

‘… donates and staffs mobile medical vans that bring health care to poor and indigent children in urban and rural locations around the United States. Since it’s inception in 1986 it has provided over 3 million doctor/patient visits. In the wake of Hurricanes Andrew and Katrina it was the primary health care source for those communities decimated by the storms.’

Could Sting ask Widodo to spare the lives of the Bali Nine pair?

It would be wonderful, if given his earlier public campaigning for President Widodo, that Jokowi cleverly utilised in his election campaign strategy, Sting would now approach him on an humanitarian basis and plead for Jokowi to spare the lives of Australians Andrew Chan and Myuran Sukumaran.

Both have been sentenced to death as a direct consequence of outrageous breaches and legal and moral misconduct by the Australian Federal Police, successive governments and other supposed protectors of the people.

Their lives are being sacrificed to protect the “guilty” in Australia, in the first instance. Jokowi’s love for music is well known. He has not only attended concerts but also performed onstage with groups, including English band Arkarna.

On St Valentine’s Day, in a prophetic retweet, Arkana guitarist Matt Hart sent out ‘ Love is giving someone the power to destroy you, but trusting them not to.’

And how curious that one of Arkarna’s albums is called Fresh Meat and one of their songs called ‘So little time’.

When Jokowi, whose facial resemblance to President Barack Obama is so uncanny he could pass for Obama’s little bro, was Governor of Jakarta, Metallica bass guitarist Robert Trujillo gave him anautographed guitar with the words ‘giving back’ clearly visible.

Blabbermouth reported that upon hearing the news that Jokowi had won the election an exuberant:

“Incredibly, ladies and gentlemen, the new President of Indonesia is a metalhead AND a LAMB OF GOD fan. No, this is not a joke, yes the photos are real, yes, he digs NAPALM DEATH, METALLICA, MEGADETH and LAMB OF GOD, amongst others.

“Joko ‘Jokowi’ Widodo, the governor of Jakarta and former furniture salesman who was born into poverty, has won the election.

“I do not know much at all about Indonesian politics, so I can’t comment of their political situation one way or the other, but from what I can tell, Jokowi seems to be a man of the people.

“Wow. A metalhead president — who would have thought? AMAZING. I mean, can you IMAGINE it? This is THE ONLY PRESIDENT IN THE WORLD with whom you can sit down and argue about which SLAYER record is the best.

Holy crap, it’s too much!

“I want the Prez to take me on a diplomatic surf summit to Bali. Maybe I can get ambassadorial status.” 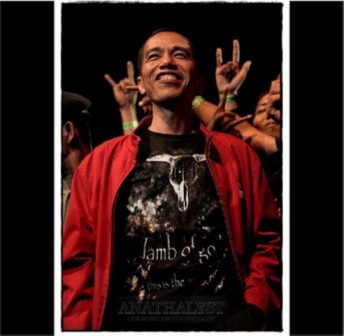 Widodo had attended Metallica’s concert in August 2013. The group is not only popular with Jokowi, but is also wildly popular in Indonesia generally, much to the chagrin of some rigid fundamentalists.

It says much about Widodo’s ability and his identifying with “ordinary” people — to cut through all that and even increase his popularity base.

The name of one of the Metallica’s albums, ‘And Justice For All’, seems pertinant to the awful plight of Myuran Sukumaran and Andrew Chan, as do some of the lyrics from the song of the same name:

Hammer of justice crushes you

The ‘B’ side of The Police single written by Sting, the menacing and compelling ‘Every Breath You Take’ is’ Murder by Numbers.’

Fairfax’s Jewel Topsfield has written of Napalm Death’s moving plea to Widodo, one of their more unexpected fans.

Vocalist Mark “Barney” Greenway has posted a “direct appeal” to Mr Joko on Napalm Death’s Facebook page – which has more than 700,000 fans – to “please spare the lives of Andrew Chan and Myuran Sukumaran”.

“As a follower of our band Napalm Death, you would appreciate that our lyrics and ethos challenge the unbroken cycle of violence in the world, whether it comes from a state or as an individual,” he wrote.

Last Thursday, Independent Australia sent an email to Sting via his event promoters in Australia, unashamedly pleading with Sting to send a Tweet to President Joko Widodo asking for clemency for Andrew Chan and Myuran Sukumaran.

I can’t help thinking of his album The Dream of the Blue Turtles and one song in particular:

‘If You Love Somebody Set Them Free’.

The Sting in the ‘Bali Two’ tale.