Sinkhole at busy London tube station has commuters stunned with a view into Australia. 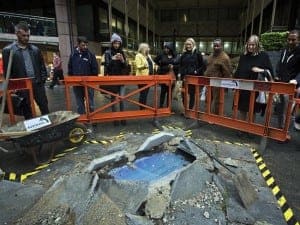 Stunned Londoners discovered a brand new sinkhole appeared over night at one of the city’s most pressured tube (train) stations.

Onlookers were surprised that the sinkhole allowed them a glimpse into a much sunnier and drier Bondi Beach!

A clever stunt by a group of Australian travel agents came-up with this unique and rather ironic publicity stunt at Oxford Street station promoting Australia to more than 75,000 rain drenched London commuters.

This ‘sinkhole’ installation is the cherry on top of an intensive two week long campaign by Tourism Australia and travel agents promoting Australia as an ideal holiday destination for Brits with emphasis on the easily accessible land Down Under.  The ‘sinkhole’ provided a live streaming with images of Bondi Beach, the Gold Coast and Sydney Harbour.

“I’m sure we’ve all heard the old wives tale of ‘dig for long enough, you will end up in Australia’ well, we’ve made that a reality and have brought a touch of Australia to London,” Austravel general manager Karen Joyce said. “We want to encourage stressed out Londoners to consider a holiday there and highlight that it doesn’t take much to get a piece of Australian sun,” she added.

In an extensive independent survey by TripAdvisor, 5,000 Brits described New Zealand and Australia as their dream destinations, an opinion indirectly positively affected by the Duke and Duchess of Cambridge’s visit to the countries with baby Prince George last month.

If architecture is the canary in the coalmine, the outlook for construction is appalling

Sydney pub hit with a fine for not maintaining social distancing